Being individual advocates for acceptance, equality and anti-bullying for over a decade now, the young group is pleading for help from the media. 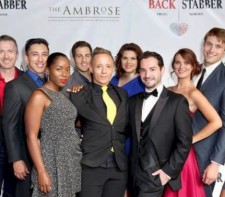 New York City, July 6, 2016 (Newswire.com) - When it comes to educating the public and reaching millions of readers around the world, the press is the #1 outlet in spreading the word. Most recently the producers and creators of 'Back Stabber', the newest series on Amazon, have hit the press lines asking for help to spread their shows message. The shows incredible mission statement has become highly attractive to leading journalists and press outlets, as the advocates behind it hope the show can impact the lives of viewers around the world.

Revolving around acceptance, equality and anti-bullying, the new show 'Back Stabber' has hit home with many of its viewers, 27-year-old creator Ryan Zamo said, “Our cast and team have been advocates for our shows message for over a decade now. We haven’t gotten paid for the show, and have spent the past year working like crazy to finish this series.Being openly gay, I how it feels to be bullied and harassed, and knowing some of the victims from the Orlando massacre I know our show has come at the right time.”

"We want people to accept each other for who they are, not what they are."

Ryan Zamo, Creator of Back Stabber

The new Amazon series ‘Back Stabber’ premiered June 24th with a final production value of under $2,000. The show itself is available exclusively on Amazon, but the producers heavily emphasize the fact that it is not an Amazon Original Series, and not affiliated with Amazon nor Amazon Studios, Zamo said, “We are independently produced and just chose to premiere it on Amazon, other than that there is no connection to them. With no help in production, and no help in budget from them, we have no money to advertise or market our shows message. We reached out to the media because we know it’s the only way we have a shot of getting the message out to viewers.”

Jumping from the least popular series to halfway to #1 in under a week, empathetic news sources have already started releasing their stories on the show, which has helped jump-start the shows traction. This past Saturday, the Miami Herald ran a story both online and in print to help the young advocates, Ryan said, “We are incredibly grateful for their support. I think our passion for our project combined with the message is really visible, and though we know the show isn’t comparable to major studio productions, we just hope that it can help make a positive impact on the world.”

With more stories to be published throughout the US over the next few weeks, the producers are now shifting from printed stories, to influential daytime talk shows. With shows such as; The Ellen DeGeneres Show, The Today Show, Good Morning America, The View, Dr.Phil, The Steve Harvey Show and other similar shows focusing on messages like the ones in ‘Back Stabber’, the producers hope they can continue to gain traction from the media.

With a low budget and no money to advertise the series, the producers are desperately trying to get their show out to the public, Zamo said, " It’s been a long journey. But we have something that can help others struggling the way we did, and with the multiple massacres in the US involving religion, sex, orientation and the likes, someone needs to start speaking out and we hope to be that voice. We want people to accept each other for who they are, not what they are."

'Back Stabber' officially premiered on Amazon last week, and is now available worldwide on Amazons global sites. The series is available for anyone to download, and is free to download with an Amazon Prime account.

Source: Back Stabber The Series LLC