Hitting international headlines last week, the 'Anti-Gay' church is still stirring the social media pot against the 26-year-old gay CEO of Z Skin Cosmetics, bringing in massive sales for him and growing more frustrated with no reaction from the 26-year-old. 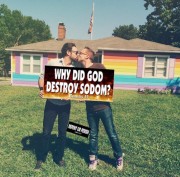 Los Angeles, CA, December 29, 2015 (Newswire.com) -  Westboro Church created a spike in sales for the young gay CEO of Z Skin Cosmetics last week using social media. And if they are seeking some sort of reaction from the gay-owned organic cosmetics company, Ryan Zamo just continues to whole-heartedly thank them, acknowledging them for helping to pull in revenue for his organic cosmetics company.

Even more than just helping his organic cosmetics company, Zamo is also an accomplished young actor, singer and director, he said 'Not only have my sales gone up on my cosmetics line, but my digital music sales have skyrocketed, my fan pages have gotten so many more likes, and people have been emailing me like crazy thanking me." The attention from Westboro Church has done more than they know, reports have shown that his album sales of 'The Lost files', his  'gay-pride music', has gone up almost 300% since the social media frenzy began.

The social media frenzy started after  the church members found a picture of him kissing his finance across the street from the church grounds, by tagging other church members, sharing and commenting on the photo they inadvertently caused it to start  trending. Thanking them with a basket of their organic skincare products, it seems Zamo really ruffled their feathers even more, causing the church to post and tag him in a 'better' edited version of his own photo. Then, as the photo circulated with likes, comments and shares, it was officially named the anti-gay churches 'photo of the week' creating even more attention for Z Skin Cosmetics.

The postings by the church once again swirled the cycle around, creating a whole new social media frenzy, as even Zamo himself shared their photos and tweets to him, he said, 'I think it's absolutely hilarious. I mean honestly, my fiancé and I are comfortable enough with ourselves that this kind of stuff doesn't bother us, but I mean they're right...were gay; SURPRISE! But the way we see it,  if it's still going on, we may as well embarrass it! The basket we sent them was returned to us with a note, I decided not to open it, and threw it away instead."

Embracing the moment is exactly what the young entrepreneur did, after being named the 'anti-gay' organizations photo of the week, the CEO of Z Skin Cosmetics created a sale in honor of his award, the promo reads 'They don't hate me cause I'm gay, they hate me cause Im fabulous! Save 15% off with promocode THNXWB:) "

Though it seems that Westboro's black feathers are ruffled over Z Skin Cosmetics, the young gay entrepreneur seems to have his feathers perfectly in tact, minding no attention to the social media whirlwind they've created around him, his fiancé and his organic cosmetics company.

Z Skin Cosmetics speaclizes in affordable, luxury, organic skincare, hair care and mineral makeup. The vegan friendly, cruelty free brand was started n a young entrepreneurs kitchen to help with his own acne and hair loss problems. Using knowledge from his mothers long respected career as a plant biologist and horticulturist, and his fathers childhood in Budapest, Hungary, the 25-year-old began creating his own products using exotic ingredients. Within months, the products had become an international sensation, and have since been named the # choice by multiple world leading magazines, on television and news shows, and was named' 'A True Inspiration' at the 2015 American Music Awards.