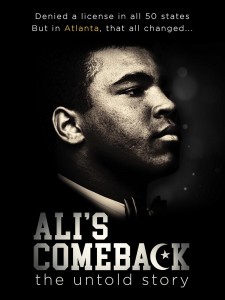 LOS ANGELES, September 23, 2020 (Newswire.com) - Vision Films Inc. (“Vision”) has acquired the global distribution rights for the feature-length documentary “Ali’s Comeback: The Untold Story” from director Art Jones and Dream Factory. On Oct. 26, 2020, Vision Films will kick off the campaign with an interactive online showcase to commemorate the 50th anniversary of the Ali vs Quarry fight that is the subject of the film. “The Greatest Knockout” event will include scenes from the film and Q&A with the film’s principals.

An October limited theatrical run is contingent on COVID-19 restrictions.

Additionally, on Dec. 1, 2020, the film will be released on VOD via streaming and cable platforms and in all major retail outlets in the United States and Canada.

By 1970, Muhammad Ali had been exiled from boxing for his stance against the Vietnam War, stripped of his title, and convicted of draft evasion. But in Atlanta, a diverse group came together to ensure he received his rightful comeback. Featuring an all-star cast including Jim Brown, Juan Carlos, Evander Holyfield, Edwin Moses, Andrew Young, and Ali’s former wife Khalilah Ali, the film captures the era including the amplified voices of social, religious and racial justice - Carlos (and Tommie Smith) raising clenched fists at the 1968 Olympics, a symbol that has become synonymous with the Black Lives Matter movement - to political voices of the time in Atlanta and the social scene and fashion flair of the '70s.

“'Ali’s Comeback' is one of those important documentaries that reminds us to never forget our history,” says Lise Romanoff, Managing Director/CEO of Vision Films. “The timely message in this film celebrates the heroes who paved the way for all who fight for racial equality and social justice.”

Director Art Jones shares, “Ali's loss of millions of dollars over his three-year exile clearly demonstrates that we should all stand for something, regardless of the sacrifice. We are grateful for the insight of Lise Romanoff and the Vision team in seeing the timeliness of the social impact created by 'Ali’s Comeback.' The film is ripe for today.”

Vision Films is a leading independent sales and VOD aggregator specializing in the licensing, marketing, and distribution of over 800 feature films, documentaries, and series from some of the most prolific independent film producers in the world. Led by Lise Romanoff, Managing Director/CEO Worldwide Distribution, Vision Films releases 2-4 films a month across theatrical, VOD, DVD, and television platforms. www.visionfilms.net