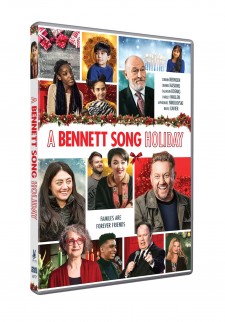 LOS ANGELES, October 15, 2020 (Newswire.com) - Vision Films Inc. (“Vision”) announces the DVD and VOD release of A Bennett Song Holiday, November 10, 2020. The full-length feature from Executive Producers Nancy Oeswein and Thor Grandview, Auburn Moon Productions, Director Harley Wallen, and Painted Creek Productions, will be available in the US and Canada. With a diverse cast, including deaf actors who speak ASL, poignant issues addressed include racism, loyalty, education, and tolerance. Family is who you chose it to be and love comes in many colors.

Synopsis: With a baby on the way, the diverse Bennett-Song family teams up to stop a developer who wants to close down the community center. Love, teamwork, and holiday magic are sure to save the day!

Lise Romanoff, CEO and Managing Director of Vision Films says, “Harley Wallen has struck another beautiful chord with A Bennett Song Holiday and the talented young cast is so impressive. A mixed-race family taking on established power structures is so very timely and wrapped up in this particular story, makes for the perfect holiday film we all need. ”

Harley Wallen, Director shares, “I knew after I read the script this would be something truly special, so much love, diversity and inclusion. I can’t wait to share this film with the world, it is so much of the things we all need right now!”

This film has received The Dove Foundation’s Dove Seal for 12+.

Auburn Moon Productions is an award-winning producer of independent feature films. Helmed by screenwriter Nancy Oeswein, they are best known for the family films Bennett's Song, A Bennett Song Holiday, and award-winning films in the thriller and horror genre, including Moving Parts, Betrayed, Eternal Code, Agramon's Gate and Enigma.