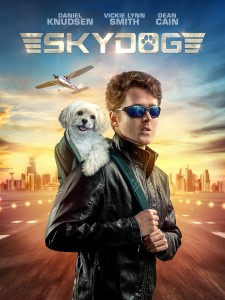 LOS ANGELES, October 5, 2020 (Newswire.com) - Vision Films Inc. (“Vision”) announces the DVD and VOD release of Sky Dog on October 20, 2020. The full-length feature from Director Daniel Knudsen and Crystal Creek Media will be available in the US and Canada.

When Colt Lifestone (Daniel Kundsen), a high school senior working on his pilot’s license, rescues a stray dog named Oreo, the two quickly become best friends. His normal quiet life is turned upside down though when he finds out that his mom (Jeannine Thompson) is actually an undercover CIA agent lead by Director Neil Glasswell (Dean Cain). When she’s captured and held hostage, he’ll need to team up with Oreo and his new friend Alice (Vickie Lynn Smith) to find his mother, uncover the double agents within the CIA, and save the day.

Lise Romanoff, CEO and Managing Director of Vision Films says, “We are so happy to partner again with Daniel Knudsen on another meaningful movie. Sky Dog is the perfect family film that reminds us to trust our gut and that we are capable of more – there is a great big world out there full of fun and intrigue. These are important messages for families now more than ever.”

Daniel Knudsen, Director shares, “Sky Dog is a special movie to me because aviation runs in my family. My grandfather was a pilot, my father is a pilot, and my brother is a pilot. Beyond the enjoyment of making the movie, I think it has a really important message. In our generation it is easy to get trapped behind a screen or a video game console. The theme of Sky Dog all about getting out and really living life because real life is better than video games. It’s a great family movie that I hope everyone will enjoy.”

This film has received The Dove Foundation’s Dove Seal for 12+. “This remarkable movie features some peppy music, a suspenseful plot and the ever-likeable Dean Cain as an intelligence director, so what’s not to like?” - Edwin L. Carpenter The Dove Foundation