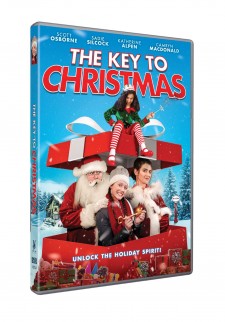 LOS ANGELES, October 13, 2020 (Newswire.com) - Vision Films Inc. (“Vision”) presents a fun for the entire family, holiday feature film from director Jason Mills and Millspictures Studios. The Key To Christmas will be released on VOD and DVD on November 10, 2020 in the US and Canada. The film had almost finished principal photography when COVID-19 forced production shut down; it was completed in five days implementing strict pandemic protocols.

Synopsis: When a disgruntled elf named Winnie (Samriddhi Singh) sees her chance to take over the North Pole, she uses a magical machine to turn back time on Santa (Scott Osborne) and he begins getting younger- fast!  With Mrs. Claus (Sadie Dilcock) in candy cane jail, it's up to loyal elf Lovey (Katherine Alpen), a little girl with a magical key (Camryn Macdonald), and teenage Santa (Liam Tait) to save the future of Christmas.

With a contemporary twist on “The Curious Case of Benjamin Button,” Santa ages backwards and as a teen, is the coolest skateboarding Claus in history. The diverse cast features teachers and students from Delta Film Academy in Vancouver where high school education and the film industry intersect.

Lise Romanoff, CEO and Managing Director of Vision Films says, “The Key To Christmas delivers a really fun new take on saving Christmas from the bad guys. The entire family should grab the popcorn and settle in for original music, laughs, and pure family fun.”

Jason Mills, Director shares, “The Key to Christmas touches a special place in my heart as my children were the inspirations for this collaboration. I wanted to create a fun and special twist on a classic Christmas movie, with the music and magical feel of the season. I am proud to create a holiday film that can be enjoyed by the whole family!”

This film has received The Dove Foundation’s Seal For All Ages.

Jason Mills is a passionate independent writer, director, editor, and founder of Millspictures Studios; an internationally recognized, award-winning film and videography company based out of beautiful Vancouver, British Columbia. Jason founded Millspictures with the intent of making low budget films at blazing fast turnaround rates, whilst keeping quality and standards at a high. millspicturesstudios.com