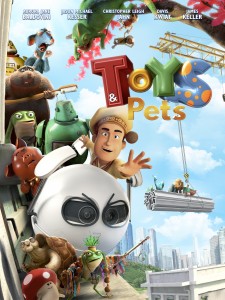 LOS ANGELES, January 8, 2020 (Newswire.com) - Vision Films Inc. (“Vision”) announces the VOD release of Toys & Pets on January 14, followed by DVD release on Jan. 21, 2020. The full-length children’s animated feature from Director Gary Wang, Light Chaser Animation Studios and Factoris Films will be available in the U.S. and Canada in both English and French.

Gary Wang brings stunning and state-of-the-art animation to audiences with this original, action-packed fable. Toys & Pets follows a very special group of toys, created by the Toy Master himself, who live happily in a teashop and all have a special gift—they can change colors. Only one toy, Nathan, lacks the ability, and the other toys make fun of him. One day, a robot from the future arrives, and Nathan learns that by finding a mystical figure, he can discover the secret to change colors and finally be happy. On their journey, Nathan and the robot, which he names Time Bot, discover that The Flash, an evil rat who steals toys, has captured their friend May. Nathan and Time Bot embark on a magical animated journey through the city’s underground to rescue May, find the mystical figure, and outsmart The Flash and his gang of rats. They will discover that teamwork, friendship, and a little luck, may be all they need to save the day.

Lise Romanoff, CEO and Managing Director of Vision Films, says, “This is one of those special films that we delight in bringing to audiences of all ages. Fun for the entire family, Toys & Pets features incredibly stunning animation with instantly lovable new characters and creative storytelling. This film elicits joy and reminds us all of the importance of teamwork and friendship, no matter one’s age or station in life. We are proud to partner with Factoris Films to share this title across the U.S. and Canada.”

This film has received The Dove Foundation’s Dove Seal for All Audiences.