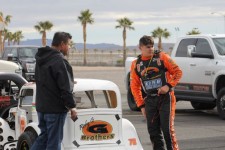 LAS VEGAS, February 19, 2019 (Newswire.com) - Traveling back to the Las Vegas Motor Speedway for rounds seven and eight of the United States Legend Cars Silver State Championships, Ricky Gutierrez was able to score a double podium, including a victory in a dominant weekend of competition.

Saturday proved to be a little colder than average for the 7:00 am track arrival as Ricky G would learn at the drivers meeting that this weekends event was set to be run in the opposite direction. Taking it all in stride and looking to put his best foot forward, the multi-disciplined driver approached the day’s action with ease, ending the first practice of the weekend in the third position.

“I took some time to get everything warmed up properly and consistently reduced my lap time,” explained Ricky. “There was very little grip due to the cold temperatures so it was all about learning and gaining confidence going in the opposite direction.”

After qualifying in the pole position, and winning his heat race, the young Californian started the main event from the inside of the front row. Taking the green and jumping out to the lead early, Ricky G held a pair of competitors at bay until lap five.

“I drove into a corner a little too deep causing my car to push wide and allow the other drivers to pass me,” he added. “I stuck with them and picked off one pretty quickly. On the final circuit, I was able to take the lead with four corners to go but unfortunately, was not able to hang on as he was able to get a better run out of the last corner and out drag raced me to the finish line.”

Determined to top the podium blocks on Sunday, Ricky G made that apparent during his morning qualifying session. Scoring the fastest lap of the session by more than a second, the target was firmly placed on his back going into the wheel-to-wheel competition.

Taking the lead at the drop of the green flag in the heat race, Gutierrez  led from flag to flag securing the pole position for the main event. In similar fashion, the Troy Adams coached driver got another great start in the main event and jumped out to the lead early until a red flag flew with four laps remaining.

Ricky G added, “The red flag was the last thing I wanted to see. This would force a double file restart and a chance for my fellow competitors to attack, and they did.”

Losing the lead on the restart, Ricky G had to concentrate on hitting all of his race lines until he was in striking distance. Out braking his fellow driver, Ricky made his way to the front and once again held any advances at bay as he crossed the finish line to his first career US Legend Car Series win.

“It is finally good to get the monkey off my back and I can’t wait to get back behind the wheel.”

Ricky G would like to thank his partners for their continued support. A huge shout out to G Brothers Racing, MPI Innovations, Dustin Ash Motorsports and Troy Adams Coaching. 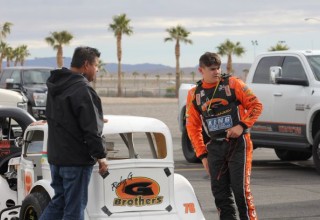 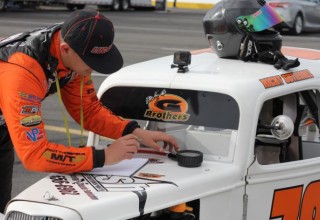 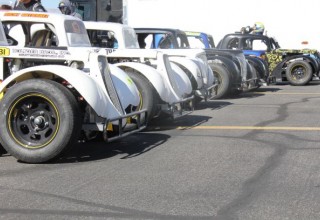