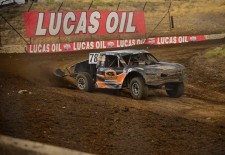 RENO, Nev., August 1, 2019 (Newswire.com) - Stepping up to a track like Wild West Motorsports Park in Sparks, Nevada is a very intimidating thing to do, but Ricky G took it all in stride this past weekend. As one of the fastest tracks on the Lucas Oil Off Road Racing Series, the speed and quantity of jumps can spook veterans and rookies alike but has the assets to get the crowd on their feet and provide some terrific on-track battles.

With a double race format taking place over two days of competition, practice took place on Friday afternoon with qualifying and race slated that evening. Additionally, Saturday provided another chance for drivers as a second qualifying session and wheel-to-wheel action that evening would produce an additional chance to stand atop the podium.

“For Friday’s first three practice sessions, I felt really comfortable in the truck and everything was going smooth,” explained Ricky G. “It was definitely a little nerve-racking stepping up to a track with such high speeds but once I started driving, it really was an awesome track to race on. We felt good about the truck but we were a little skeptical about the weather forecast.”

Due to the heavy rain showers and lightning strikes only miles from the track, the Lucas Oil Off Road Racing Series Safety Crew and the Race Director decided to cancel qualifying and grid Friday nights event based on the current point standings. Due to some bad luck from the first couple events of the season. Ricky G started at the back of the pack but was motivated to drive his way forward.

Ricky G continued, “When the race started, I was very eager to start passing trucks but coming out of turn three my truck randomly shut completely off. The safety truck towed me back into the hot pits and my crew was checking everything over. It ended up being one of the breakers popping out and as soon as we pushed it back in my truck started up right away. I was able to get back out on track but a lap down. It really sucks being a lap down but the only thing I could do was just put my head down, drive hard and work on practicing for Saturday nights action.”

Returning to the facility on Saturday, the track was in good condition and the #78 truck was prepped and all ready to roll. When qualifying began, everything was progressing nicely and Ricky G had slotted himself into the grid with the sixth fastest lap on the opening few circuits. As the session wore on, a brake failure occurred and there was nothing to slow Ricky G down as he headed for a truck that had spun and was stranded at more than 60 miles per hour.

“It definitely did not make me happy but it’s another situation where things like that happen in racing,” added Ricky G. “The good news was that there was barely any damage to the truck so all we had to do was fix the brakes and some minor bodywork to be ready for the race.”

Saturday’s wheel-to-wheel action commenced in front of packed grandstands and Ricky G quickly advanced forward to the sixth position on the opening lap. Taking advantage of attrition on lap ten, the talented youngster moved into the fifth position before a late race caution slowed the field for a restart.

“Disaster struck on the restart with only two laps to go,” explained the driver of the #78 truck. “My oil Pressure went to 0 which meant my motor was going to blow up. Unfortunately, that meant I had to pull off to the side of the track and retire from the race. It’s another one of those days but I was still very happy with how my crew and I did the past weekend. It was a really good learning experience and a fun one as well.” 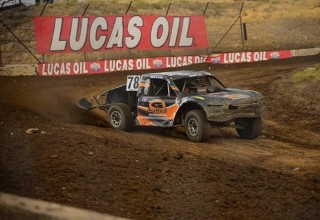 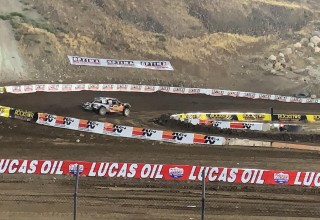