More than 70 apprentice carpenters from the union carpenter training center worked on the project from mid-June through July at the Harrowgate PAL gym, in the Ramblers Recreation Center on East Tioga Street.

“Laying down a maple floor that endures heavy use is completely different from what you have in your home,” said Ron Kromer, floor covering instructor at the Philadelphia Carpenters JAC (Joint Apprentice Committee).

“The PAL serves as a focal point for youth in the neighborhood, allowing them a safe and friendly environment to play basketball and other activities,” Kromer said. “The gymnasium floor became so worn that it was dangerous for kids to use.”

Kromer credits Philadelphia policeman Frank Rivera for being the catalyst that led to the renovation of the 7,000-square-foot floor. “Officer Rivera is a symbol of stability, fairness and generosity, and the kids greatly admire him,” said Kromer. “You can talk about role models, but Officer Rivera is one.”

Rivera contacted Kromer and asked for help. Most union locals have a representative who serves as a starting point when someone approaches them for a volunteer effort that requires the skills of a highly trained carpenter.

City Floor Supply donated supplies for the flooring project, and councilwoman Maria D. Quinones-Sanchez, District 7, helped to earmark $30,000 from capital funds for the improvements, according to Rivera.

Maple floors are the preferred choice for a gym floor because they are better at resisting the wear and tear of use and improve ball bounce. They are also less detrimental to the joints and feet of athletes, according to Kromer.

Local youth also became involved in the flooring process. They stenciled a replica of Officer Rivera’s badge, No. 1512, in the gym.

The Harrowgate PAL has had a positive impact on the neighborhood.

An added benefit for local youth is that they watched as union carpenter apprentice volunteers fitted the floor during the installation process. “We had the opportunity to introduce the idea that becoming a union carpenter would provide them with a highly skilled career with good pay,” Kromer said. 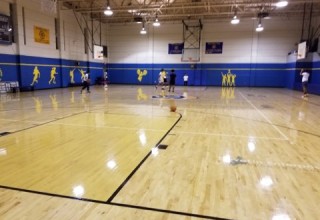 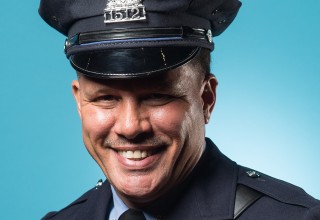