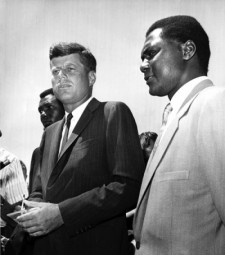 Memphis, Tennessee United States of America, June 15, 2016 (Newswire.com) - August 15, 1956 marks the true beginning of the Barack Obama Jr. legacy in America. August 15, 2016 the 9th Congressional District in Memphis, Tennessee is making preparation to celebrate the history and legacy and the true beginning and start of the Obama legacy in America.  Anthony "Amp" Elmore a five time world Karate/Kickboxing champion from Memphis, Tennessee argues that the emergence of American President Barack Obama Jr. belongs to the civil Rights movement in America and not just to the "Airlift America movement".  Elmore 1st visited the country of Kenya in 1990.  While in Kenya Elmore experienced a "Spiritual Awakening" tantamount to that of the late comedian Richard Pryor who visited Kenya in 1979.  Pryor whose heart and soul of his comedy routine was the use of the "N" word.  Pryor after his "spiritual awakening" in Kenya lead him to stop using the "N" word.

Elmore notes that President Barack Obama Jr. also experienced a spiritual awakening  in Kenya and his story is told in his 1995 book "Dreams from my Father"  a story of race and inheritance.  Elmore a five time World Karate/Kickboxing champion life has not been the same since he 1st visited Kenya to premier his Independent Memphis made film "The Contemporary Gladiator".  Elmore notes that he encountered "A spiritual awakening in Kenya" and it was only after the election of President Barack Obama Jr. that the spirit revealed itself.

"Education is, in truth, the only key to genuine African independence and progress." Senator John F. Kennedy, February 12, 1960

Elmore published a You Tube lecture titled "Mboya Africa's Greatest leader and the Civil Rights Movement lead to Obama." Elmore in his just over one hour lecture notes that we must get the history of President Barack Obama Jr. correct. History notes that Barack Obama Jr. is the result of "Airlift America" whereas 100's of  East African students were brought to America as part of the JKF and Airlift America.

Elmore notes in his "You Tube Lecture" that JFK and Airlift America was only the child, but the Grand parents of Barack Obama Jr. is the "Black Struggle and the Civil Rights movement in America are the parents of Barack Obama Jr. On August 15, 1956 a 26 year old Kenyan by the name of "Thomas Joseph Mboya" arrived in America on his 26th birthday.  Elmore in his lecture explains Tom Mboya from an African/American prospective.  Elmore explains that the true essence of Tom Mboya as he relates to Black history and culture has been left out of the Obama story.

Elmore explains that Thomas Joseph Mboya's trip to America was sponsored by "ACOA" or the "American Committee on Africa" founded in 1953 by Civil Rights pioneers Bayard Rustin and George Houser. Bayard Rustin was an expert organizer from human rights protests.  He was an adviser to Dr. Martin Luther King and the chief organizer of the 1963 March on Washington where Dr. Martin Luther King Jr. delivered his famous "I have a dream speech."

George Houser was a Methodist minister who dedicated his life to the Civil Rights struggle.  In 1942 Houser and James Farmer Founded  "C.O.R.E." or "Congress of Racial Equality"  civil rights organization.  Houser and Bayard Rustin organized the first test of a United States Supreme Court ruling that barred segregation on interstate transit. They created a  campaign called the Journey of Reconciliation, that sent black and white riders through the South on interstate buses in an effort to integrate "interstate travel."  They experienced personal risk and bloodshed.

Tom Mboya's 1956 trip to America was part of the "Civil Rights Struggle in America." The Obama connection and Airlift America came some three years later in 1959. Elmore in his lecture explains how A Phillip Randolph a longtime civil rights advocate influenced the AFL-CIO Union in America helped Tom Mboya to secure himself as an adroit Kenya leader in Kenya by donating $35,000 in 1956 to build a Union building in Kenya. More importantly Elmore notes that the relationship with "ACOA" integrated Tom Mboya with the "Black leaders in America."

Elmore notes as Mboya author David Goldsworthy writes in the book "Tom Mboya the man Kenya wanted to forget" a culture exists in Kenya that wish to forget Tom Mboya.  Elmore experienced this culture in February of 2012 when Memphis Congressman Steve Cohen invited Kenya Ambassador Elkanah Odembo to meet with Elmore at his Washington D.C. office.  Elmore explains that Kenya Ambassador Odembo expressed a spirit antithetical of Tom Mboya as the Kenya Ambassador eviscerated Elmore's  idea to bring Africans and African/Americans together.

Two months earlier Ambassador Odembo visited Memphis for Kenya's Jamhuri Celebration  (Independence day Celebration) while Elmore wrote the Ambassador prior to his coming to Memphis this Kenya Ambassador held an "aversion" to connecting to the Black Community." Elmore notes that thanks to the Mboya influence on December 12, 1963 African/Americans were a major part of Kenya's liberation.  It was Black Supreme Court Justice Thurgood Marshall who wrote "Kenya's Constitution." Jet magazine December 6, 1960 listed  the  "whose who" of Black Americans who was invited to Kenya's independence celebration.

When Mboya arrived in America in 1956 Dr. Martin Luther King along with Bayard Rustin were  involved in the Montgomery  bus boycott in Alabama. Via ACOA Tom Mboya had access to every Black College President in America whom he could ask for scholarships. George Houser a Methodist Minister was able to get religious schools to award scholarships to the students, although no American Blacks attended such schools.  The Kenyans were awarded scholarships in White Colleges because they were listed as Foreign Students.

Tom Mboya was assassinated in Kenya on July 5, 1969 and there still exits a  culture that murdered Tom Mboya in 1969 exist in Kenya today in 2016.  Elmore explains in his lecture that "spirit of Tom Mboya" re-emerged in America on November 4, 2008 via the election of American President Barack Obama jr. whose father comes from Kenya was part of the Kenya "Airlift America" culture started by Tom Mboya.

Elmore explains that the tragedy of "Airlift America" is the misinformation and the fact that "Airlift America" is a child of the Black Struggle and Civil Rights movement.  More importantly Kenya, Airlift America and the Civil Rights struggle as it relates to Tom Mboya was clearly a Black and White historical movement that should be celebrated and made into a movie. Elmore in his "You Tube" lecture provides an African/American and an American prospective of Tom Mboya.

Elmore in his lecture details how Tom Mboya, Kenya students and the Black vote played a major role in the 1960 election of American President John F. Kennedy.  History shows us that John F. Kennedy's 1960 political platform included helping African students and educating African leaders.  President Kennedy used the July 26, 1960 picture of he and Tom Mboya as part of his political advertisement  in America. The facts speak for themselves in that Kennedy won the 1960 election by a razor thin margin of 1/10th of 1%.  Clearly it was the Black vote that catapulted Kennedy to his 1960 victory.

One has to look no further than the Kennedy Presidential Library to see the historical impact that Tom Mboya and Kenya students made on American history. While this history is a part of the John F. Kennedy Library we find a culture in Kenya prefers to forget Tom Mboya. Elmore asked Memphis Congressman Steve Cohen to assist at bringing the true Obama legacy to American people and the World.

August 15, 2016 marks the 60th Anniversary of Tom Mboya arriving in America.  Anthony "Amp" Elmore who lives in the 9th Congressional District in Memphis, Tennessee is planning a celebration to honor the legacy of Tom Mboya whereas he influenced  the successful elections of two American Presidents.

Memphis hosts the Dr. Martin Luther King Civil Rights Museum. Dr. King was killed in Memphis April 4, 1968.  April 4, 1968 marks the 50th Anniversary of the death of Dr. Martin Luther King.  Elmore is seeking to get the country of Kenya to engage in a Memphis/Kenya joint celebration in 2018. Elmore is asking then retired American President Barack Obama to come to Memphis to honor Dr. King's 50th.