The thread that connects President Obama to Kenya and Airlift America is threaded to a home called the "Safari House" in Memphis located in an Area that is called "Orange Mound." Orange Mound is the 1st neighborhood built by former slaves. Orange Mound was formerly the John George Deaderick Plantation. 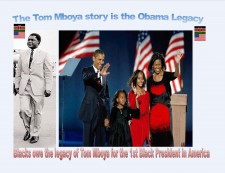 Elmore is hosting a celebration at his home "The Safari House"  Saturday August 13, 2016 titled “Mboya’s 60th.” On August 15, 1956 an African by the name of  Tom Mboya from then “British East Africa” made causes that would influence the world.  Elmore coined the phrase “without a Mboya there would be no Obama.” President Obama election as the 1st Black President in America is significant, and while his approval ratings have skyrocketed Anthony “Amp” Elmore is working to tell the not well known Mboya story of the Obama legacy. Elmore wrote a letter to both President Obama and Secretary of Education John King  to note that the Obama legacy started with Kenya's Tom Mboya who came to America on August 15, 1956.

President of the United States of America

Tom Mboya was a 26 year old trade union member who wrote a pamphlet titled; "The Kenya question.” The civil rights organization"A COA or  "American Committee on Africa”  founded by gay African/American  civil rights pioneer and activist Bayard Rustin the brainchild of peaceful protest in America and George Houser a liberal White minister who helped found the 1940’s civil rights organization called  “C.O.R.E.” or “Congress of Racial Equality.” The diverse vision of  “ACOA” that was founded in 1953 manifested itself as the 21 Century “Obama Coalition.”

The Manifestation of  Barack Obama Jr. emerged from efforts of "Tom Mboya.” Mboya  came to America in 1956 to speak at colleges. Mboya held a vision of an Africa absent of Colonial rule.   Mboya  understood that if Africa was to be independent Africans must be educated.  Mboya asked college  Presidents to provide scholarships for African students. Mboya also  solicited others for sponsorships for airfare and expenses.

Singer Harry Belafonte, Baseball great Jackie Robinson, and actor Sydney Pointier lent their names on a letter asking Americans for donations to pay for a chartered plane from British East Africa to America. The plan was called "Airlift America." The 1st plane arrived in New York September of 1959. The Airlift America culture lead to a 23 year old African from British East Africa by the name of  Barack Obama who arrived to go to school in Hawaii in 1959.

On June 26, 1960 Mboya met with Democratic nominee Senator John F. Kennedy. Mboya convinced Kennedy to sponsor charter airplane for  African Students for the September 1960 school year. This event lead Kennedy in October of 1960 to including helping African students and training African leaders  part of his 1960 Presidential platform.  Kennedy used the picture of he and Mboya as a marketing strategy to the African/American voter who were traditionally Republican.   Mboya’s influence helped to change the  outcome of America’s 1960 election Blacks changing form Republican to Democrate.

Anthony "Amp" Elmore notes; On August 13, 2016 we will stand at an "African Styled Home" in an area that was was once a slave plantation.  We will pick up the gauntlet where  Dr. Martin Luther King fell in Memphis. Our historic celebration in Memphis picks up the gauntlet of Tom Mboya who fell in Nairobi, Kenya.  Since the inception of Slavery in America and African nations gaining independence no African Country has offered African/Americans a "Formal State Reception." The history of Tom Mboya in America lead not only to Kenya being a democratic nation, the relationship lead to  America's 1st Black President.

In July of 1990 Anthony "Amp" Elmore traveled from Orange Mound, Tennessee to Nairobi, Kenya. In 1995 Elmore married a Kenyan woman.  While they are no longer married their son Anthony "Amp" Elmore like President Obama is 1/2 Kenyan.  While President Obama is connected to Kenya in Washington D.C. we in Memphis are connected. We at the  "Mboya 60th" will call for the country of Kenya to honor its "African American family" with a "Formal State Reception in July of 2019.

From the area that was once a slave plantation we are asking the country of Kenya to honor it family who are citizens of America but family to Africa with a "Formal State Reception."  April 4, 2018 marks Dr. King's 50th.  We ask that Kenya President Uhuru Kenyatta and retired President Barack Obama both  come to Memphis for Dr. King's  50th celebration. We in America will come to Kenya for Tom Mboya 50th where we are asking President Obama will be our keynote speaker.