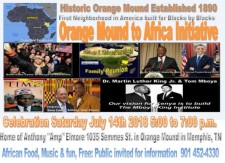 MEMPHIS, Tenn., July 12, 2018 (Newswire.com) - Twenty-Five years after the 13th Amendment that freed African Americans from Slavery, the 1st Neighborhood in America built for African Americans by African Americans emerged in 1890 in Memphis, Tennessee. This neighborhood is called Orange Mound. After 128 years, today "Orange Mound" is reminiscent of the movie "The Color Purple" whereas Mister told Celie: "You are poor, you Black and you ugly." Celie replied; "I'm poor, black, I might even be ugly, but dear God, I'm here. I'm here."

Anthony "Amp" Elmore a Five-Time World Karate/Kickboxing Champion who lives in "Orange Mound" notes, "We in Orange Mound are more than here. In the words of the Hood, 'We in the House.'" Elmore is hosting an African Cultural Kickoff celebration Saturday, July 14, 2018, in concert with President Obama's upcoming visit to his father's Ancestral home in Kenya called Kogelo, Kenya, scheduled July 15th and 16th 2018.

At a key point in the 1960 presidential campaign, a dynamic young leader from Kenya named Tom Mboya visited Senator John F. Kennedy. Mboya led a campaign of his own that would eventually bring hundreds of African students to America for higher education, including Barack Obama Sr., President Obama's father. Kennedy's decision to support the effort became an issue in the election and possibly a factor in his narrow victory.

Obama’s delegation is made of renowned professionals, celebrities, philanthropists, clergymen, activists, top lawyers, businessmen, and diplomats. The most noted celebrity in the Obama entourage will be Oprah Winfrey. They will visit Obama’s father’s hometown of “Kogelo, Kenya” to kick off the “Sauti Kuu” initiative. Sauti Kuu – Swahili for "Strong Voices" – is a foundation started by his sister Auma Obama that seeks to provide an outlook for the future to children around the world.

Elmore explains that it is an honor that the people in "Orange Mound" are connected to President Obama, the Civil Rights movement and Dr. King's dream with Africa. What is unknown to most people in America or even in Kenya where Tom Mboya was born; "Tom Mboya is the most influential African in the history of America to impact American culture, history, and politics." It is the history and influence of Tom Mboya that leads us to our "Orange Mound to Africa Initiative."

The "Orange Mound to Africa Initiative" mandates that the community of "Orange Mound" are the first in the world to pick up the torch of Dr. King that fell in Memphis 50 years ago April 4, 1968. We take the torch of Dr. King to Africa and let it burn. It was in 1953 when an organization named ACOA, or American Committee on Africa was formed. The goal of the organization was to fight for the freedom and liberation of Africa. Dr. King was a member of ACOA from 1957 until his death.

It was August 15, 1956, when ACOA sponsored the 26-year-old African from then "British East Africa" that later became Kenya. ACOA invited Tom Mboya to come to America to speak. The articulate, charismatic, Tom Mboya not only became the face and voice of Africa; he also lifted the spirit and hopes of Black America. Mboya Marched with Dr. King at the "Youth March for Integrated Schools on April 18, 1959" whereas Mboya addressed the audience. It was in May of 1959 whereas the Black college Howard University in Washington D.C. would award Tom Mboya with an honorary Doctorate Degree.

On May 13, 1959, Dr. King and the SCLC sponsored Tom Mboya an "African Freedom Dinner" at Atlanta, University. It was at this African Freedom dinner where Dr. King said: "Our struggle is not an isolated struggle,” King insisted. "We are all caught in an inescapable network of mutuality.”

Dr. King wrote Tom Mboya a letter dated July 8, 1959. Dr. King wrote; "I am sure that you could sense from the response that you gained all over the United States that your visit here made a tremendous impact on the life of our nation. Your sense of purpose, your dedicated spirit, and your profound and eloquent statement of ideas all conjoin to make your contribution to our country one that will not soon be forgotten."

The "Orange Mound to Africa Initiative" is an effort to ensure that the efforts of Tom Mboya and Dr. Martin Luther King are never forgotten. To ensure this, the creators of the initiative propose the Tom Mboya/Dr. Martin Luther King Educational and Culture center be built in Nairobi, Kenya. One skeptic of the idea noted to Elmore that "he has no backing, no assurances or how could such an idea from Orange Mound gain currency."

Elmore explains that "Orange Mound" was the 1st neighborhood in America built for Blacks by Blacks. Elmore explains it was much harder for African/Americans to build the 1st Black Community in America in 1890 than it is to build the 1st African and African/American college in Africa. A proposed college labeled with the names Tom Mboya and Martin Luther King has a history. It was Dr. Martin Luther King who told America of a Dream he had. It was Tom Mboya who asked for the opportunity for Africans to get an Education that helped lead to Barack Obama becoming the President of the United States of America, the most powerful man on planet earth; and Tom Mboya's "Airlift America" helped lead to Wangari Maathai becoming the first African woman to win the Noble Peace Prize.

It was Orange Mound's fir Independent produced film, "The Contemporary Gladiator" that led Elmore along with a few cast members to the film's premiere in Nairobi, Kenya in 1990.

The film playing in Kenya was not only a Memphis/Kenya trade and cultural arrangement; Elmore took Orange Mound to Africa, and he brought Africa to Orange Mound. Elmore would not only marry a Kenyan wife, and together they produce a son who is 1/2 Kenyan; Elmore also became "Smitten" with the "Spirit of Africa. Elmore explains how in 1980, Comedian Richard Pryor's trip to Kenya led to a spiritual awakening whereas he stopped using the "N" word.

Elmore explains that the "Orange Mound to Africa Initiative" connects with President Barack Obama Jr. Elmore in 1992 met Kenya President Daniel Arap Moi who named Elmore an African Ambassador. Elmore's August 1992 Kenya visit was at the same time Barack Obama would bring his fiance Michelle Obama to Kenya. Elmore took groups to Kenya for over a decade in the 1990s. It was in February of 2003 that Elmore went on an African Goodwill mission to Kenya, Ethiopia, and Ghana that Elmore arranged from Kenya to be honored in the Memphis Africa in April celebration in 2004.

The Orange Mound to Kenya Initiative gained a new life on November 4, 2008, when Barack Obama was elected President of the United States. Elmore tried for almost two decades to get his friend Dr. W.W. Herenton Memphis, the first African/American mayor to connect with Memphis with Africa via trade, culture and family relationships. Elmore opens an African import store in Memphis produced an African styled Tuxedo for President Obama. While President Obama never wore the Tuxedo, Elmore learned that the Tuxedo would be displayed in the Barack Obama Presidential Library.

From Orange Mound in Memphis, we celebrate with Barack Obama, Oprah Winfrey and the dignitaries who will visit Kogelo, Kenya. Elmore displays a billboard photograph of himself in Kogelo, Kenya and he and Sarah Obama on his Orange Mound home in Memphis.

The community in Memphis in Orange Mound propose a college in Kenya, an African Homecoming celebration in Kenya and an African trade agreement whereas Memphis will become "Africa's Distribution Center." Elmore plans to travel to Kenya in October of 2018 to introduce the "Orange Mound to Africa Initiative." 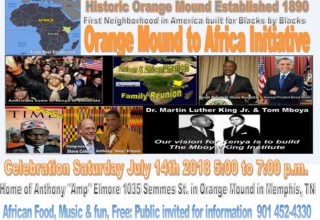 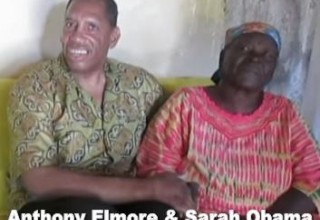 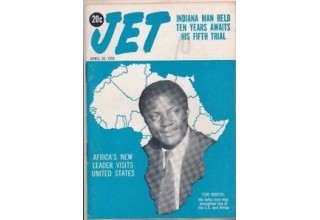 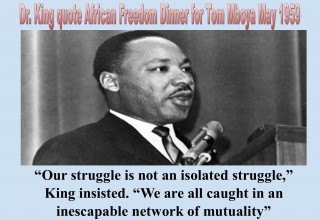