Announcing the secret recipe for successful quality window tinting - a unique seven-step process designed to ensure the removal of the vast majority of the mounting- solution used during the installation of Window Tinting, or Security Window Tinting Film from Dr. Window Tint. 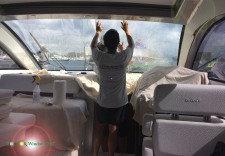 The success of Dr. Window’s excellent work cannot be understated. Security window tinting has had a massive effect in curbing crime-related injuries. One of the success stories involves Publix Supermarkets, who had recently had the clearsteel system installed in many of its stores. The security tinting film prevented numerous break-in attempts, including on a specific occasion where a shotgun blast failed to penetrate the glass of the store window, giving the robbers a surprise and causing them to abandon their plans to rob the store.

Another success story is that of a Colombian car bomb which exploded on the street in downtown Bogota. The people in a nearby government building, which had recently opted for security tinting film by Solar Control(R), were free of injury save for one lady who was hit by an entire window assembly held together by the film. Sadly, there were many deaths due to thrashing glass in the other nearby buildings who had not opted for a security film tinting system. Quality window tinting not only offers security benefits. but It has also prevented the spread of raging fire in a skyscraper. Window tinting film can also offer protection from harmful UV rays in your home and in your car.

Dr. Window Tint installs window tinting on cars, houses, businesses, and boats using a unique 7-step process to insure a top quality job every time. With 35 years of experience, our work can be found across the globe.

It's Almost Hurricane Season: Doctor Window Tint® is Highlighting the Success of Security Window Films
Doctor Window Tint®'s array of window treatment is not only strengthening windows but also securing homes and buildings. Amazingly, Solar Control® brand security film has never failed to exceed expectations with regard to what it was installed to accomplish.
Doctor Window Tint - Mar 10, 2020