Doctor Window Tint®'s array of window treatment is not only strengthening windows but also securing homes and buildings. Amazingly, Solar Control® brand security film has never failed to exceed expectations with regard to what it was installed to accomplish. 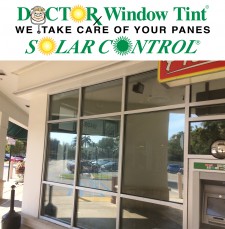 MIAMI LAKES, Fla., March 10, 2020 (Newswire.com) - ​​​With Hurricane season fast-approaching, preparing homes for the annual tropical weather that can run rampant during the latter months of the year is important. A lot of thought and formulation goes into getting a home ready for the unpredictability of a hurricane.

Solar Control® brand is a window security film that protects from harmful UV rays and adds structure to the glass so that breaking into a home is that much harder for intruders. The “glue” of the film makes an almost impenetrable bond to the glass, strengthening windows and increasing its shatter-resistance.

The Solar Control® brand security film has already proven its success years ago when the U.S. government had it installed on all the windows of the government buildings in Colombia, South America, in conjunction with the ‘war on drugs.’ Later, a car bomb was detonated in Bogota by a local drug cartel. While the windows in the building were blown out, they stayed intact and attached to the window frames. This meant less debris and damage from shattered glass, and even more amazing, fewer injuries, and no one died inside.

After Hurricane Andrew in 1992, Publix Supermarkets contracted Doctor Window Tint to install Solar Control® brand security film on many of its stores to help with hurricane damage  In one instance shortly after,  two men stood outside the door and indicated that they wanted entry, the manager refused and backed away from the door. One of the men pulled out a sawed-off shotgun and shot at the glass door. When the glass door stayed intact, the two men ran away. The facility services manager later awarded the company with a plaque for the appreciation of their safety and excellent service and product.

“As exclusive installers of the Solar Control® brand, we are able to service the commercial and residential needs of our clients with the best security window film around. Whether it’s a tornado, hurricane or burglar, we’ve seen great results with this product and our clients have too,” says Jonathan Chisholm, owner of Doctor Window Tint®.

Get added security for your business or home. Don’t rely on yesterday’s shutters and boards, the future of window security is here, and with just one call to the Doctor, that additional protection can be yours. Call now and experience the difference for yourselves. Doctor Window Tint® caters to all your window tinting needs.

Doctor Window Tint® is the exclusive installer of Solar Control® brand window tinting film and makes every attempt to separate itself from the competition through quality and customer convenience and satisfaction. Call or text (305) 827-8468 for a quote.

Dr. Window Tint installs window tinting on cars, houses, businesses, and boats using a unique 7-step process to insure a top quality job every time. With 35 years of experience, our work can be found across the globe.