Common Fibers launches The Coolest Fanny as an April Fools'joke, but it quickly becomes a success. 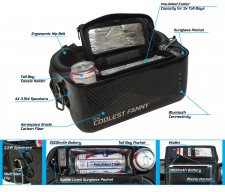 Seattle, WA, April 5, 2017 (Newswire.com) - Common Fibers launched a carbon fiber fanny pack with four Bluetooth speakers, qi and USB phone charging capabilities, and a beer cooler compartment called The Coolest Fanny on April 1st. Over the weekend 10,000 people visited commonfibers.com and showed their support for the product.  With the quick amount of interest, Common Fibers plans to launch The Coolest Fanny on Kickstarter in early Summer.

Common Fibers welcomes home the 1980’s by bringing back the fanny pack.  The Coolest Fanny can keep three tall boys cool, charge your phone, store your sunglasses, play your music, and hold your cards and cash in a built-in wallet.  These features are mounted on a 100% aerospace grade carbon fiber body attached to an ergonomic hip belt.

The CEO of Common Fibers took the first prototype with him on a trip to Mexico this past weekend and put it to the test.  While on vacation, the Coolest Fanny entertained people waiting in lines at the airport, carried extra food and drink to the beach, and was the perfect day pack for four wheeling.  Over the course of the weekend, many potential customers expressed their interest in the product, some going as far as to say “I need this in my life! Where can I buy one?”

The Coolest Fanny was created as an April Fools' joke but has gained so much interest that Common Fibers is developing a production version to be launched on Kickstarter. The fanny pack will be sold for $249 on Kickstarter.

Common Fibers designs and develops advanced consumer goods with the industry’s only fully carbon fiber design.  Utilizing their patented CF-Lex™ technology, Common Fibers plans to increase access to composites by expanding their use through the design of simple, functional and disruptive products.  While becoming the leading name in the carbon fiber consumer goods space, Common Fibers utilizes its team’s expertise to maintain integrity while keeping it simple, doing more with less, and focusing on the customer.

Dude I Want That - http://www.dudeiwantthat.com/omg/fools/carbon-fiber-fanny-pack.asp