The independent, record breaking, low-budget TV show has been a breakout success on Amazon. Promoting anti-bullying, acceptance and equality, the show has been named the breakout favorite for a possible 5 Golden Globe Awards. 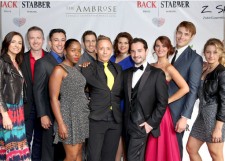 Hollywood, CA, September 3, 2016 (Newswire.com) - ​Virtually unknown just 8 weeks ago, ‘Back Stabber’ has taken the world by storm, and has captured headlines around the globe since its June 24th premiere on Amazon. The history of the production itself has pulled in audiences, but its messages in the show are what have attracted major media outlets. Premiering with a final budget of about $1750, the breakout TV series is now up for multiple Golden Globe Awards.

Created by openly gay actor, singer and LGBT advocate Ryan Zamo, ‘Back Stabber’ has pushed the envelope of acceptance in today’s society. Focusing on accepting those that are different, anti-bullying, and equality, the show faced years of rejection and ridicule from top Hollywood producers.  27-year-old Zamo said, “I wrote the pilot as a final project in film school over 7 years ago now, which I got a C on by the way. I wanted to create a story that would increase awareness of today's social issues. It was my freshman year in college, and knowing nothing about pitching a show to networks, I tried to sell it to anyone and everyone who would listen.”

"Let me clarify that it's not the quality or editing of the show that deserves recognition and awards, it's the back story and passion behind it that needs to be seen by the public, these 2 prove that anything is possible if you put your mind to it."

Just over a year ago, after starting his now successful organic skincare company, Z Skin Cosmetics, Zamo found himself wondering how he graduated with a film degree and went on to own an organic skincare company, saying, “I was looking at my diploma wondering how that happened. I’ve always loved TV and film and that’s what I wanted to do with my life since I was 11 years old, then it hit me”, he added, “I had a pilot that nobody wanted to produce, a degree in TV film production and my own equipment, so I decided to produce it myself. I would rather say I tried it and it didn’t work out, than sit here 10 years from now wondering, “what if?”.”

Zamo and childhood friend Jordan Fraser, also an advocate for LGBT rights, quickly teamed up to produce the show. After 6 grueling years of rejection from Hollywood, the two young film-makers began pre-production on the pilot for ‘Back Stabber’, 25-year-old Jordan Fraser said, “We were both stoked. Then the past rejection of the show started all over again, nobody wanted to fund us, and either said it was too racy or would never be successful.” Without a budget, they produced the pilot for $200.  After production of the pilot ended, the duo landed on making 'Back Stabber' a Netflix series, but quickly decided to move it to Amazon's video streaming platform instead.

Working for free, the cast and crew spent the next 364 days finishing the series. With no budget, Zamo took on the role of every job, teaching himself; audio engineering, editing, special FX and many other jobs he had no previous experience with.

The unknown series ‘Back Stabber’ officially premiered on June 24th, and after its record low budget began to shock everyone, it soon caught the attention of major media outlets. In her article titled 'How One TV Series Has Changed The History Of Film-Making Forever' Rebecca McDonald of the Huffington Post wrote, “I could see if the show looked like it was produced for $1750, but it doesn’t, it looks like a multi-million-dollar project.”

With its wild success over the past few weeks, the show was recently announced as a candidate for the Golden Globes, Zamo said, “We got word a few days ago that we are officially in the running for the Globes. I would have never thought that the show would be this successful, I didn’t even think anyone would watch it, let alone be up for a few Golden Globe Awards.”

In the category of “Limited Series or A Motion Picture Made for Television”, ‘Back Stabber’ is in the running for:  Best Actor [Alex Alsina, Jimmy Fint-Smith], Best Actress [Zasha Shary], Best Supporting Actor [Ryan Zamo], Best Supporting Actress [Angela Tesch] and Best Overall Series. 'Back Stabber' was created and written by Ryan Zamo, and produced by co-directors Ryan Zamo and Jordan Fraser.

Available exclusively on Amazon Instant Video, ‘Back Stabber’ can be downloaded without an Amazon account, and is available for streaming at: https://www.amazon.com/Back-Stabber/dp/B01GJ1RU4W

For more information and news on 'Back Stabber', visit the shows official fan page: http://www.backstabbertvshow.com/#!news/hfox4