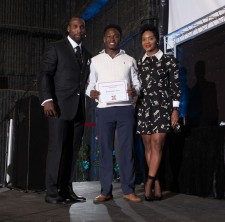 West Palm Beach, FL, May 31, 2017 (Newswire.com) - On May 24 from 6pm-9pm, Student ACES hosted its first annual ACE Champion Awards “Honoring our Champions of Character” presented by Oh Boy Sports and benefiting Student ACES. The event was held at GStar School of the Arts, in West Palm Beach. It was a spectacular night in which the character traits, values and talents of our amazing students were showcased. We recognized and honored ACE students that demonstrate our core values:

"We have witnessed these high school students develop into confident young men and women of character, honor and integrity. These students practice the principles of the program, Commanding Respect, Earning Trust, Sacrifice, Work Ethic Second to None, Ethical and Moral Decision Making and a Personal Brand and Image that exudes winning attitudes and sets a positive example to all." -  Buck Martinez, President and Co-Founder of Student ACES.

Student ACES is a 501c3 non-profit organization that does not charge students to be in the program. Student ACES solely rely’s on donations from Private Foundations, Individual Donations and Corporate Sponsorships. To make a donation visit www.studentacesforleadership.com/donate

About Student Aces
​Student ACES (ACE: Athletics + Community + Education) is a 501(c) 3 organization dedicated to impacting our country by developing the next generation of leaders; young men and women of character, honor and integrity. ACE does this by providing best-in-class leadership curriculum, mentoring and projects that make a difference in their community.

About Oh Boy Sports
​Oh Boy Sports (ohboysports.com) is a lifestyle brand anchored by those unspoken things that made us love sports in the first place—camaraderie, discipline, respect, and commitment. Oh Boy Sports was established in 2013 to provide digital tools and content that makes the fan experience more exciting and involving than it already is. This year with the help of the ACE Program, Oh Boy Sports is launching Oh!Plays – where “your big time sports plays meet real time reactions! “