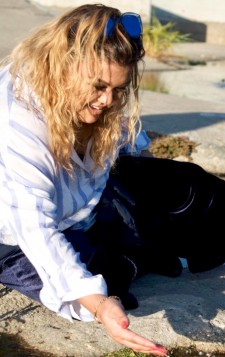 The first single written by Tom Weir is called “I Don’t Give a What”. It was recorded at his award-winning studio, Studio City Sound (in Studio City, California) It’s a mid-tempo pop/R&B track with a blend of synths and real instruments by world-class musicians. Studio City Sound is a well-known recording studio for popular artists like Kelly Clarkson, System Of A Down, Rod Stewart, and more. With their state of the art equipment, mic pre-amps, and cutting-edge sound facility, this was a dream come true for Nima.

The second single is written by music producer, Vasily Pinchuk and is called “I Can Do it All”. A strong upbeat, electronic track recorded at NRG Studio in North Hollywood, California. NRG is a well-known recording studio for artists like Linkin Park, No Doubt, Evanescence, Papa Roach, and more. This song was done in NRG’s Studio B (aka the Moroccan room) on the custom Neve 8078 console.

Both singles: “I Don’t Give a What” and “I Can Do it All” will be available in mid-October 2018 in all digital stores, worldwide.

The music video for “I Don’t Give a What” was directed and filmed by Guerilla Hollywood Production’s Michael Mihael.