Appearing on Project Runway in fall of 2016, the 27-year-old entrepreneur has now successfully closed his first major retail deal, landing a contract with the leading international giant Walmart. 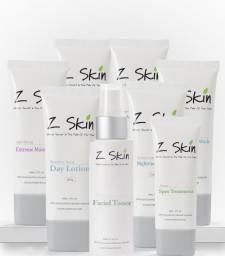 Los Angeles, USA, March 13, 2017 (Newswire.com) - Founded in 1962 by Sam Walton, Walmart has now grown to become the world’s largest company by revenue, and employs 2.2 million people around the world according to Forbes Magazine. With 12,000 stores spread out across the world, Walmart is reported to carry almost 150,000 different brands. Although the number of brands carried might be high, the chances of landing a deal with the retail giant are extremely low. Geomarketing.com reports that approximately 96% of brands that approach the international giant will be turned away.

Now 27-year-old Ryan Zamo has officially become part of the 4% of accepted brands, taking his handmade organic skincare brand ‘Z Skin’ into Walmart stores. After launching his brand is late 2014, the young entrepreneur appeared on the Lifetime show ‘Project Runway; Fashion Startup’ in November, pitching his company to the panel of investors, Zamo said, “Though I did not get a deal, the main reason I went onto the show was to move my products into retail stores. I’m actually glad I didn’t get a deal though, I was able to successfully do everything I wanted on my own.”

With the international exposure from the show, which is currently airing on Bravo TV in Canada, Zamo was able to leverage his appearance to land a deal with the global giant, he said, “I tried connecting with them a few times before being on the show but never even got a response back. After I was on the series, I was able to approach them with the number of viewers, explaining that now over 1.5 million people would potentially recognize the brand.”

When asked why he chose Walmart over other major retail chains, Zamo explained, “Z Skin has become so successful through our website ZskinCosmetics.Com because we are an affordable organic skincare brand. I wanted to bring my products to the everyday consumer at a price they can afford, and if I had gone with Macy’s for example, my customers most likely wouldn’t be able to afford it anymore. Walmart on the other hand is known for bringing great products at the lowest price possible, which is exactly what I wanted.”

Though he did not move all of his products into the store, Zamo said he proposed his top selling products to be sold. Currently, the Z Skin products that can be found within Walmart are; The Complete Age Defying System, Complete Acne System, Face Lift Lotion, Face Lift Wash, Daytime Eye, Nighttime Eye, Acne Day Lotion, Acne Night Lotion and Z Skin Coffee Face Scrub.

Shanna Moakler Set to Produce LGBT and Anti-Bullying TV Series
As a recognizable face in Hollywood, the multi-talented actress is stepping up as a producer on the hit series 'Back Stabber'.
ZskinCosmetics.Com - Apr 17, 2017
Newswire