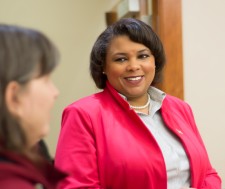 The poll by Change Research found among all voters, Williams was actually leading Wittman in polling by 0.2 percent with a margin of error +/- 3 percent.

The scientific polling took place between August 29-30, asking voters in Virginia’s 1st Congressional if the election were held today and you had to choose between Rep. Rob Wittman and Vangie Williams, who would you vote for?

She secured the Democratic party nomination in June, beating several other candidates.

“This is a two-person race between a 10-year GOP incumbent who has amassed a personal fortune of $2 million and a mother of six with an extensive career in both the private and public sectors,” said Williams. “Rep. Rob Wittman has been in office for more than 10 years yet he has only passed five pieces of legislation; three of those pieces of legislation were to rename post offices in our district. We need a representative who will make education, healthcare, jobs and our economy a priority.”

Virginia’s 1st Congressional District is frequently called, “America’s First District” since it originally included Jamestown and was the country’s first permanent English settlement in the New World. It has a long history of racial struggles, making William’s primary win so much more noteworthy. There has never been a woman of color to secure the Democratic nomination in the 1st District nor has a woman of color ever represented Virginia in Congress.

Virginia voters as a whole are more energized with 91 percent of all respondents saying they plan to vote in the November 6 election. Democratic voters appear more energized than Republicans and Independents.

Close to 88 percent of registered Democrats say they will vote in the November general election, compared to 83 percent of Republicans and 82 percent of Independents.

“As we get closer to November, voters will hear more of my background and why my experience as a mother, wife, government contractor and project leader with national security experience is the better choice,” said Williams. “We don’t need a rubber stamp representative in our district. We need a leader who is bold and prepared to push legislation that improves the everyday lives of our communities in Virginia.”

Vangie Williams is a public servant and strategic planner who solves problems for our federal government. A real-world professional with 30 years of experience, Vangie is not a career politician. Instead she is a proven leader committed to an economy for everyone, healthy families and investing in our communities. Vangie lives in King George with her six daughters and husband, a small business owner. Learn more about her vision to put people first at www.vangieforcongress.com.