Metronaut, the AI Powered Classical Music Practice App, Has Been Named Among the Top 10 French Apps by Apple

The music accompaniment App Metronaut is selected to be featured in Apple's Crème de la Crème marketing campaign, celebrating the best French apps on the App Store. On this occasion, a new version of the App has been released, revealing a drastic change both in visual identity and navigation style. 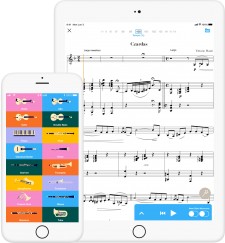 CUPERTINO, Calif., July 8, 2019 (Newswire.com) - Allowing musicians of every level to play with an orchestra that listens to them and adapts to their interpretation in real-time, like another musician would: This is every amateur's dream and the unique concept that has seduced more than 200,000 people on the App Store since September 2017 and has gotten Apple's attention on Metronaut App.

Antescofo, the Music/AI startup behind Metronaut, was part of the first Apple developer program at Station F and had the opportunity to benefit from Apple team's guidance and support through several features on the App Store, the highlight being an appearance in Apple's Crème de la Crème campaign, celebrating the best French Apps in the App Store: https://apps.apple.com/story/id1467363363

Today, Apple Teams have renewed their trust in the classical music App by including it in their latest global marketing campaign, offering Metronaut and 9 other French Apps, including Petit Bambou, Yuka and Coyote, great visibility across their marketing channels. Meanwhile, Station F teams are also showing their support by listing Antescofo in STATION F's 2019 Top 30 startups, highlighting the greatest successes of the year.

On this occasion, Antescofo is releasing the latest version of Metronaut, featuring a drastic change in the look of the App as well as the way users navigate its growing music catalog, to offer musicians a richer, more personalized experience.

Bright, colourful flat design illustrations and animations are the main components of the new visual identity of the App. This vibrant new look not only matches the taste of the mainly young audience of the App, but also serves Antescofo greater ambition to break classical music free from preconceptions, thus democratizing music practice as has been the case for listening to music with streaming apps.

Metronaut's redesign isn't limited to the look of the App, but also aims at becoming even more of a companion for amateur musicians, whatever their age, level or instrument.

To relieve amateurs from the pain and boredom of practicing alone, ​and on top of its unique real-time content adaptation feature, ​the App notably already allows users to choose the tempo and transposition of their accompaniment, record their performances, and track their progress. The latest version goes a step further by helping users choose the right piece to practice, something a lot of amateurs struggle with.

Through suggested playlists curated by classical music experts, Metronaut will indeed allow users to expand their musical horizon, whether they want to challenge themselves, explore a music genre or play something fitting their current mood.

Next steps for Antescofo and Metronaut? Growing the App music catalog and reinforcing international presence, especially in China.

Thanks to a successful Series Seed Fundraising of €4m with Daphni and other prestigious investors such as Yann LeCun (Facebook Chief of AI) and Idei Nobuyuki (former Sony CEO), Antescofo was indeed already able to double its catalog size, which should reach 1000 pieces by the summer. Metronaut was also released on the Chinese App Store, where it was immediately featured.

Metronaut is available now for iOS in the App Store at:
https://apps.apple.com/app/metronaut-musical-companion/id1202148484

About Antescofo
Antescofo was born from the match between the best of research and entrepreneurship. Antescofo's technology was designed over 7 years of R&D at IRCAM in Paris, the world's largest laboratory of music and technology, and tested with the world's leading musicians and orchestras. Antescofo's intelligent automatic listening system allows one to perceive a musician's game in real time; this information is then used to synchronize a musical accompaniment into an immersive experience. Antescofo was created in 2016 in Paris. Metronaut, Antescofo's first App, was launched in 2017.

We specialize in app-related marketing and advertising. Through our refreshingly affordable and impressively effective solutions, we help clients around the world promote their unique apps to a large number of targeted journalists, websites and more.

Nebo Continues to Evolve as the Most Advanced App for Professional Note-Taking
By giving users the possibility of integrating their handwritten notes in the digital world — using Apple Pencil, Logitech Crayon, Samsung S-Pen (or similar device) — Nebo establishes itself as a real game-changer. With a few taps and strokes, Nebo lets users create and interact with handwritten, typed or dictated notes like never before, via a custom interface that maximizes note-taking accuracy, flexibility and efficiency.
appshout! - Sep 13, 2019
Newswire