Made for Under $2k, 'The #1 Most Anticipated New Tv Show' Breaks Records With Surprising Success

The show started 7 years ago as a college students final project in film school, and has now become the newest global phenomenon. And with the show premiering June 24th, the media is now bombarding the fresh new faces as they take on their first press tour. 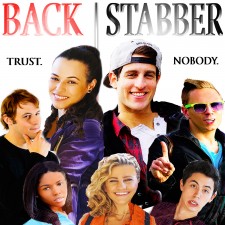 Los Angeles, CA, June 8, 2016 (Newswire.com) - ​​​The newest  hit tv series 'Back Stabber' has given a whole new meaning to a low-budget success story. With the entire first season of the show fully produced for under $2,000, it has made history for its unprecedented success with such a small budget.

Starting 7-years-ago as a final project in film school, ‘Back Stabber’ has been dwelling in the mind of executive producer and creator Ryan Zamo for years now, he said “It was originally written during my first year in college, ‘Back Stabber’ was my final project for a script writing class, and though I got a C on it, I knew we had a million-dollar-idea. So I convinced some friends to join my team, and together we started knocking on doors all over Hollywood.”

After years of facing Hollywood’s wrath, the group of young producers decided they couldn't wait any longer, saying, “We finally realized we could produce it ourselves; we had our own professional equipment, the combined skills to make it look professional, and nothing but time to lose.”

After filming wrapped last June for the pilot episode, the group of producers were left to choose between continuing with the series or cutting it loose, they said, “Despite all the near-death situations we encountered,  which started with 3/4 of our cast dropping out the day before shooting the pilot, we were shocked by how amazing the show looked, we unanimously agreed to move forward with the full season.” After trying to get the series picked up, and in the hands of execs at networks such as MTV and Freeform [formally ABC Family], the producers finally realized an even bigger opportunity; online streaming.

Originally slated last summer as a Netflix Original Series, the producers jumped ship to Netflix’s #1 rival just days before season 1 was set to film, saying, “People thought Netflix and Amazon provided the funding for production, but that’s not true at all, we are an independently produced show, not a show that they bought from us. We invested our own money, we had no help from Amazon, and payed everything out of pocket. So we realized that it would be highly difficult, and cost the money we didn’t have, to stand out in the abyss of other shows on Netflix. We saw that Amazon was up and coming, and wanted to get in before it became massive, making it much easier to pull in viewers.”

With digital FX, tremendously talented actors, and a wildly addictive plot, Season 1 has the feel of a hundred-million-dollar project, the producers commented, 'Well 7 years ago we learned a whole different style of production which is obsolete in todays world, so we had no idea how to use any of these 'fancy digital editing platforms' or anything like that, we just spent hours and hours teaching ourselves from video tutorials."

After announcing the project on Amazon in November, ‘Back Stabber’ shot to the #1 most popular series in development overnight, and has now gained hundreds of thousands of followers.

Despite hitting major bumps in the road, ‘Back Stabber’ has continued to grow its fan base, and with the upcoming June 24th release, fans are eagerly counting down the days. Also, with such hype and dedication behind the new series, the producers added, 'We never thought this would become so huge, and its not the money or fame were after, we just hope that our story will inspire others to never give up their dreams.'

For all press and media interview requests,