Super Teen Philanthropist Joshua Williams celebrates 10 years of service to those in need of love, food and basic human needs by recognizing others who choose to flex their philanthropic muscle through their own service initiatives. 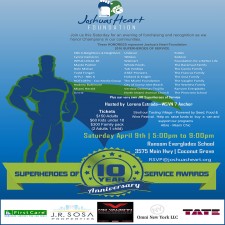 MIAMI, FL, April 7, 2016 (Newswire.com) - ​On Saturday, April 9th, Joshua’s Heart Foundation (JHF) will celebrate 10 years of service to under-served communities throughout South Florida, Jamaica, Africa and India. The teen who is known for his big heart, has been living his passion to stomp out world hunger in a big way for the last 10 years. To date the organization has distributed over 1.2 million pounds of food and other personal items to those in need. JHF has served over 60,000 families, raised over $500,000 for the cause and impacted the lives of not only those they serve but those who serve alongside the organization in order to make a global impact on the effects of hunger throughout the world.

Throughout his journey, Joshua has managed to amass an army of young people, over 7,000, in addition to adults, corporations and service organizations who share his compassion and philosophy of being your brother’s keeper. By way of volunteering and partnering with, supporting and contributing to the organization, now known for being one of the few that allows volunteers under the age of 18 to be a part of the mission, JHF has made significant strides towards impacting the hunger pandemic that affects 1 in 7 kids globally on a daily basis.

The young man who started giving back at the tender age of 4 ½ , now at 14 is fully vested in his life’s purpose of helping the less fortunate and mentoring his peers by way of example. His initiative has produced young people who have chosen to follow the philanthropic course in their own special way. By virtue of involvement with JHF, the organization has spun off humanitarian initiatives from team members called elves and organization leaders on the Junior Advisory Board that serve a plethora of needs in our communities throughout Florida and the world. Projects include but not limited to :

The award-fundraiser will recognize local and national organizations and philanthropist for their outstanding efforts and contributions to society. The honorees, just to name a few include, media partners WPLG-Local 10, NBC6, CBS4-Neighbors 4 Neighbors, HOT105-Cox Media Group. Corporations -Unilever, Publix, Holland & Knight, The City of Sunny Isles Beach,  Davidsons Safest Choice Eggs, Miami Foundation.  Journalists Mayte Padron, Neki Mohan, Todd Tongen and Rodney Baltimore. Celebrity DJ – DJ Irie for his work through The Irie Foundation and of course the backbone of the organization the families and members of JHF for which none of this would be possible without their support, contributions and belief in the cause.

“I am truly humbled and bless to have the support of my family, friends, volunteers, corporate partners and volunteer families in helping to make my vision of Stomping Out World Hunger a reality”, said Williams. “None of this would be possible without their support and commitment to the cause. For that reason, my family and I are honored to recognize them for all their hard work and contributions”, he added.

The event will be held at Ransom Everglades School in Coconut Grove, located at 3575 Main Hwy and will be hosted by WSVN’s Weekend Anchor, Lorena Estrada . Festivities begin at 5:30pm with a Green Carpet event and Tasting Village followed by the awards program at 6:45pm. Tickets are available at www.joshuasheart.org/tickets. Prices are $150 for adults, $60 for children and $300 for a family pack, which includes 2 adults and 1 child. To learn more about Joshua’s Heart or to make a donation please visit www.joshuasheart.org.

About A Better Concept PR

A full service boutique Public Relations, Advertising and Marketing Agency! We work harder for you to meet your deliverables!

Introducing Project HopeFULL, a Mission to Rebuild Mexico While Continuing to Care for Its Earthquake Victims
A Better Concept PR - Dec 21, 2017

14 Yr Old Teen Philanthropist Recognizes Humanitarians at Joshua's Heart Superheroes Award Ceremony
With his team on hand, Teen Philanthropist Joshua Williams celebrated 10 years of service (2005-2015) in grand style when he honored community leaders for their service to humanity both here and overseas.
A Better Concept PR - May 6, 2016
Newswire