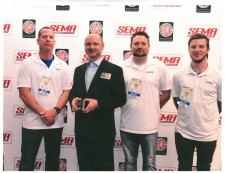 EASTLAKE, Ohio, November 10, 2017 (Newswire.com) - US Lighting Group, Inc. (OTC PINK: USLG) ("US Lighting Group" or the "Company"), wholly-owned subsidiary Intellitronix Corp. scored big with their first appearance at the annual SEMA Convention Show in Las Vegas this year by walking away with a coveted Global Media Award. Intellitronix Corp. is among an elite group of companies to receive a Global Media Award at the 2017 SEMA show after an esteemed panel of international judges selected The Company's Universal 6 Gauge Analog Dash Panel to be recognized. The voting panel reviewed nearly 3,000 new products that were featured at this year's SEMA show. Each journalist selected 10 products which they felt would be of most interest to their publications' readers and most likely to succeed commercially in their respective countries. Intellitronix Corp. was selected by the renowned Global Automotive Connection & Superfly Magazine headquartered in the United Kingdom. After an astounding year of growth, private label deals with companies such as Kawasaki Motors and the acquisition of Intellitronix Corp. into the US Lighting Group family, The Company looks pleasantly to the future, which is sure to bring even more prosperity and recognition for an already solid and innovative LED manufacturer.

About US Lighting Group, Inc.

US Lighting Group, Inc. (OTC PINK: USLG), founded in 2011, is an Ohio-based independent designer and manufacturer of high-quality patent-pending transformer-less green LED lighting tubes for sale and distribution into the commercial and industrial 4' tube lighting sectors in the United States and abroad. US Lighting Group's flagship line of LED bulbs is the BH4 Series which are distributed throughout the United States to various commercial and industrial end-users and re-sellers, and also available at several online retailers, including The Home Depot. Every US Lighting Group LED bulb is 'Made in the USA' at the Company's own manufacturing facility located near Cleveland, Ohio.

For additional information regarding US Lighting Group, Inc., visit www.uslightinggroup.com.

Statements included in this press release, other than statements of historical fact, are forward-looking statements made in reliance upon the safe harbor provisions of Section 27A of the Securities Act of 1933 and Section 21E of the Securities Exchange Act of 1934. Forward-looking statements are typically, but not always, identified by the words: believe, expect, anticipate, intend, estimate, and similar expressions or which by their nature refer to future events. Although the Company believes that the expectations reflected in such forward-looking statements are reasonable, it can give no assurance that such expectations will prove to have been correct. Actual results may differ materially from those indicated by these statements.

Intellitronix Corp is one of the leading manufacturers of Digital LED gauges in the world. We create and manufacture direct-fit and custom-made digital dash replacements for cars, trucks, SUV's, boats, and other motor vehicles.