Homelessness a State of Emergency in "YHomeless?" Documentary Film

​Last year, homelessness was declared a state of emergency in nine U.S. jurisdictions. This upward trend in "the new homeless" in post-Recession America is the focus of "YHomeless", a feature length documentary directed by Glen Dunzweiler, released by Cinema Libre Studio on DVD and Video on Demand this month. 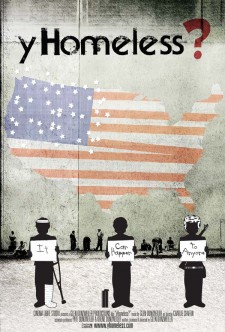 Los Angeles, CA, July 14, 2016 (Newswire.com) - ​​​Last year, homelessness was declared a state of emergency in nine U.S. jurisdictions in California, Washington, Oregon and the State of Hawaii. In New York City, the Coalition for the Homeless released statistics showing how homelessness for New Yorkers rose at an astonishing rate from 2011 through 2014, cresting at a record 60,939 men, women and children bedding down each evening in municipal shelters. This upward trend in “the new homeless” in post-Recession America is the focus of “YHomeless?”, a feature length documentary directed by Glen Dunzweiler, released by Cinema Libre Studio on DVD and Video on Demand this month.

When faced with the possibility of losing his home, Dunzweiler used money earmarked for the bank, and went on the road to thirteen American cities interviewing homeless people and service providers to find out what it is like to be homeless in America. Intrigued by statistics on “the new homeless,” defined as people who lost their homes due to a job loss or the economic downturn, Dunzweiler-who approached this project as a first-time filmmaker-was on the road for four months, living out of and sleeping in his car (or on friends’ couches) and taking showers at a local branch of his gym while handling all aspects of interviewing and digitally filming by himself.  He quickly learned that his perceptions about the homeless were incorrect. As Dunzweiler confesses, “To be homeless I thought you had to be addicted to drugs or mentally ill.”

"To be homeless I thought you had to be addicted to drugs or mentally ill."

2)      That panhandling is a viable way to make a living or that those who do it make “good money.”

4)      Although men seem to be more visible on the streets, there are many families, women and children without homes

5)      Our veterans are taken care of. In some cities, 1 in 4 people on the streets are military veterans

Of the 50 homeless people and 25 advocates interviewed, one of the main reasons cited for living on the streets is lack of permanent affordable housing and declining incomes.

Facing possible foreclosure on his home, director Glen Dunzweiler decides to find out why people in the homeless communities of America ended up on the streets. Traveling to 13 cities and eliciting personal accounts from people of different races, genders, and ages, he offers a platform to those in our society whose circumstances are quite often misunderstood, all while living out of his car in an attempt to learn what it’s like to be homeless himself.

About Cinema Libre: Headquartered in Los Angeles, the Cinema Libre team has released over one hundred films including OUTFOXED, the Sundance Audience Award‐Winning FUEL, THE END OF POVERTY?, Oliver Stone’s SOUTH OF THE BORDER, CAN’T STAND LOSING YOU: SURVIVING THE POLICE and LOST ANGELS: SKID ROW I MY HOME. The company is currently releasing VAXXED: FROM COVER-UP TO CATASTROPHE, arguably the most controversial film of 2016.  The company is in pre-production on the feature film ANGOLA, 1,2 and 3 to star rap mogul Master P.   For more information and updates, please visit: www.cinemalibrestudio.com

1)      National Alliance to End Homelessness -  - Homelessness as a State of Emergency March 9, 2016 http://www.coalitionforthehomeless.org/state-of-the-homeless-2016/

2)      National Coalition For The Homeless - Homeless State of Emergency - http://nationalhomeless.org/?s=state+of+emergency

3)      Coalition for the Homeless - http://www.coalitionforthehomeless.org/the-catastrophe-of-homelessness/state-of-the-homeless/