The TV Series became a smash hit, gaining nation attention for the shows core messages of acceptance, anti-bullying and LGBT equality, while breaking records as the lowest budgeted series in history. 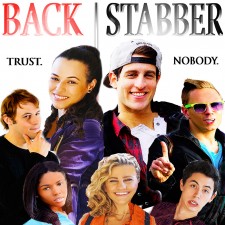 Los Angeles, CA, February 5, 2017 (Newswire.com) - Completely unknown at the time of its release in June, ‘Back Stabber’ became a breakout success, quickly drawing viewers by the masses with its societal commentary and record breaking budget. Created by 27-year-old openly gay actor and LGBT advocate Ryan Zamo, the shows controversial messages caused rejection from investors, taking over 7 years to produce season 1.  Fed up with the lack of interest, Zamo finally took it upon himself to finance the show, producing all 12 episodes for a record breaking $1500.

In an article* by renown Huffington Post contributor Rebecca McDonald, ‘Back Stabber’ was named ‘The TV series that has changed the history of film making forever”.  As the show picked up popularity, it became a dark horse in the award circuit, ‘Back Stabber’ was in the running for the Golden Globes and has now received its first official award nomination for ‘Best Ensemble Cast in A Drama’ by The Indie Series Awards.

Now in pre-production for season 2, the show’s popularity has drawn in major players in Hollywood, including some of the most sought out actors on Hollywoods A-list. And although the exact release date is yet to be announced, season 2 of Back Stabber is scheduled to premiere this November.

To stream season 1 of 'Back Stabber' on Amazon, visit: https://www.amazon.com/Back-Stabber/dp/B01GJ1RU4W