Erasmus Fox Releases 'Everyone Else Thinks This Game is Awesome'

Scale the Ivory Tower, Either by Being Right or Knowing Who Else Is. 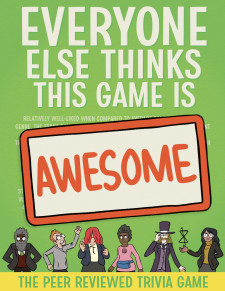 LOS ANGELES, August 26, 2021 (Newswire.com) - From New York Times bestselling pop science authors Zach and Kelly Weinersmith, along with celebrated game designer Matt Fantastic, comes a game that you can win either by knowing the truth or knowing who doesn't. Everyone Else Thinks This Game Is Awesome (by Erasmus Fox) is a tabletop trivia game where players take on the role of scientific professionals. Either by knowing the answers to questions or by knowing who, if anyone, knows the answer, they earn citation points to fight their way up the academic ladder. Do you believe in yourself or follow along with whatever everyone else thinks? The first person to the top achieves the coveted status of Emeritus Professor.

With meticulously researched questions across a variety of scientific, historical, and just really weird topics, Everyone Else Thinks this Game Is Awesome will not only challenge your knowledge of the universe but may explode scientific "truths" you think you know.

When asked what the couple's inspiration was for the game, Zach responded, "We decided to make a trivia card game, but it ended up being a research project. It turns out a lot of trivia people "know" is incorrect. Spinach? Not especially high in iron. A vomitorium? Not a place where decadent Romans went to vomit. The Great Wall of China? Actually, pretty hard to see from space. Megabats? Okay, megabats are real. And they have excellent vision. Anyway, if you're the kind of person who can say "citation needed" with a straight face, we are here for you."

Anyone with time to spare is encouraged to order the game to play with friends. According to designer Matt Fantastic, "This is a trivia game where nearly every question will cause you to waste several days on Wikipedia."

The core game has over 1,000 questions. Planned expansions include a Death Pack, a Pseudoscience pack, and "Sex, Drugs, and Citations," an uncomfortably large pack containing all the questions deemed too inappropriate for the main deck.

As Zach said, "I spent a full hour convincing myself that, contra the Internet, Cleopatra never had a [CENSORED] filled with bees. Also, turns out using [CENSORED] wasn't a thing in the Victorian era. Also, you know those fish that swim up your [CENSORED]? Probably not a thing. The claim comes from a single incident that likely didn't even happen. However, there are "[CENSORED]" which, well, I don't want to give away too much." Everyone Else Thinks This Game Is Awesome is live on Kickstarter now.

Kelly Weinersmith is a biologist who studies parasites that manipulate the behavior of their hosts. Her creepy and really disgusting research has been featured in National Geographic, BBC World, The Atlantic, and Popular Science. Kelly is also the co-author of Soonish, an NYTimes Bestseller on the future of technology.

Matt Fantastic is an accomplished game designer who founded both Forever Stoked Creative (Team3, Glamazons, X-Files Conspiracy Theory) and the New Haven Game Makers Guild. He also does consulting work for a number of corporate, NGO, and institutional clients including Netflix and Yale.