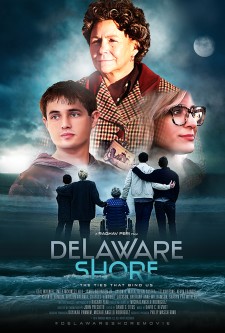 A Holocaust survivor, Agnes, living in Slaughter Beach, Delaware, is tasked with raising her grandchildren after they are abandoned on her doorstep. As they grow up, she finds she is not able to control them. Her grandson Gallagher finds himself in a gay romance with a sincere suitor. The granddaughter, Tasha, is attracted to a young hoodlum. Agnes, permanently traumatized by her wartime experiences, is emotionally abusive to Gallagher and Tasha. Will they be able to forgive her before it’s too late?

“Delaware Shore is an important and thought-provoking film. It's a moving story and we know our audiences will enjoy it when it opens this December. They will surely take home the characters and spirit of the film. I can’t wait for everyone to see this film in theaters,” says Peri, speaking in regard to his first feature film.

Tickets are also available at Fandango.

Note to editors and journalists: A screener link is immediately available for reviews.