Avocado Media LLC is pleased to announce that their film "Delaware Shore", directed by Raghav Peri, is in its final stage of production. 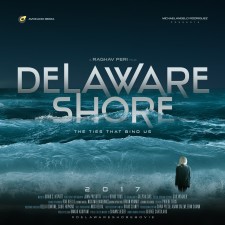 New Castle, Delaware, February 8, 2017 (Newswire.com) - Avocado Media LLC, an Indie movie production company based in New Castle, Delaware, is proud to announce its upcoming feature film "Delaware Shore" is in its final stage of production. This is the debut feature film for director Raghav Peri. The screenplay was written by Peri and Michaelangelo Rodriguez. Avocado Media LLC is eyeing a festival run in summer 2017 before the movie has a theatrical release at locations across the United States.

"Delaware Shore" is a drama feature film spanning generations, provides a fictional study of a Holocaust survivor and touches on themes of gay identity, teen pregnancy, drug abuse and violence in the society. The film follows the life of Holocaust survivor, "Agnes", who escapes a concentration camp and finds refuge on a Delaware Beach. Haunted by the war and its atrocities, she finds herself doing the bare minimum to raise her abandoned twin grandchildren. The children, Natasha and Gallagher, both struggle with finding the affection they miss at home with sometimes unforeseen and life changing consequences. The film follows how their lives unfold on the coast.

This is the first film to be produced exclusively in Delaware using a skilled, diverse acting and production talent from Delaware, Pennsylvania, and New Jersey. Director Peri is known for his previous award-winning film short, "Bar Study" and other short films. Peri met Rodriguez at a screening of his film "Bar Study" in Wilmington, Delaware in 2015. "Bar Study" was screened at multiple venues across the states and has won several awards at international film festivals. Rodriguez and Peri are excited to work together and happy with how things are pacing forward now.

"We are excited by how close we are to wrapping up production of 'Delaware Shore' and look forward to its release to the public this summer," says Peri. "The film has a lot of meaning for me personally as it's my directing debut for my first full length feature film. It's a moving story and we know our audiences will enjoy it."

Rodriguez is bankrolling this project under Avocado Media. John Presutto, an Emmy award winning DOP is handling the visual department with music by David C. Hëvvitt and editing by David Titus. The movie also has a great ensemble cast with some of the finest talents from the east coast led by Gail Wagner, playing the role of Agnes, and Emily McKinley Hill and James Robinson Jr. playing the roles of twin grandchildren. Other key cast include Ed Aristone, Kevin Austra, Jason Maga, Linwood Jackson, Kevin Francis, Brittany Anne Williamson, Kirsten Valania, David Claney, Sharyn Park Withers, Kevin Benton and Jimmy Backus, who all bring their unique personality and passion to their characters.

For more information about this film and for news on its release, visit IMDB page of "Delaware Shore".

Avocado Media LLC is a film production company based in New Castle, Delaware. They have produced the films "The Wilmingtonians", a comedy, and the documentary "Slavery's Children." The company is currently in production of Delaware Shore, directed by Raghav Peri. Avocado Media, LLC can be found on Facebook at https://www.facebook.com/avocadomedia/.

For business or trade enquiries, please reach out to Avocado Media LLC CFO Phil Mascherino at 1-484-612-5728.