Heather Fagan receives scholarship in honor of her uncle 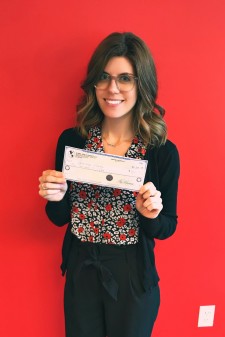 COPPELL, Texas, September 5, 2019 (Newswire.com) - ​​Heather Fagan is a recipient of one of the 2019 Fallen Heroes Scholarships provided by OmniShield Home Safe Networks. The fund was established in 2000 and has awarded over $250,000 in college and benevolent scholarships to the children and spouses of first responders who are listed on the Memorial Wall in Emmitsburg, Maryland. The fund is a Partner Program with the National Fallen Firefighter's Foundation.

"This fund was begun as a way to make an impact for our nation's heroes. The fund was the idea of Mr. Brent Jones, our Vice Chairman. It has been an honor to direct the fund for almost 20 years and stories like Heather's continue to reinforce our decision to try and make an impact for our nation's finest," stated Chris Roberts of GHS Companies and the OmniShield Brand.

Heather’s uncle received legal guardianship of her when she was 3 years old. He was extremely dedicated to his profession and she views obtaining her degree in business administration as the way to honor him. Heather considers health care her passion and plans to use her business degree to pursue that passion.

Her uncle was Scott Rogow. Throughout his career, he was cited for valor on several occasions, but most notably in September of 2005. In the midst of Hurricane Katrina, he volunteered for a 30-day deployment with the FEMA Disaster Relief Teams. While stationed at the Port City of La Batre, Alabama, he observed a civilian pumping gas at a local gas station. During the course of this, a spark caused an immediate ignition of the fumes and gas coming out of the nozzle. The flames engulfed the vehicle, gas pumps, and the victim himself. Scott, without regard for his own safety, ran through the flames and tackled the victim, saving him from the conflagration. His heroics undoubtedly averted a tragedy and for his efforts, he was awarded the New Jersey State Silver Medal of Valor. He also received the Passaic County 200 Club Valor Award, American Legion Valor Award, and was named the Knights of Columbus Firefighter of the Year.

While assigned to Paterson Fire Department’s Rescue Company 2, Scott was injured at a structure fire on July 6, 2009. After undergoing several surgeries and numerous complications, Scott passed away on Aug. 28, 2012. Consequently, he became the 28th Paterson, New Jersey, firefighter to make the supreme sacrifice.

Heather Fagan gratefully accepted the scholarship in his honor stating, "It is such an honor to be chosen as one of the recipients of your 2019 scholarships. This money will greatly assist me in earning my Masters, which I am on track to complete in March 2020. Thank you for all your support to the National Fallen Firefighters Foundation."

Omnishield Dealers Make Donations to New Zealand Burn Support Group
Sam Barnes of New Zealand presents $1,000.00, with an ongoing yearly commitment from a portion of the proceeds of his company to be awarded in support of this cause.
Global Health & Safety - Sep 4, 2019