College Sports Stars Take a 'Stab' at Anti-Bullying and Acceptance

The successful college athletes have joined together to raise awareness for anti-bullying and acceptance, generating major press for their advocacy. 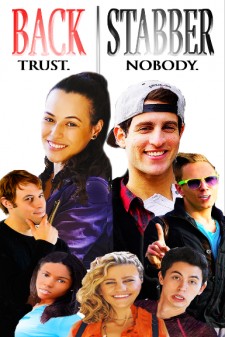 Los Angeles, CA, July 24, 2016 (Newswire.com) - ​In the wake of the massacres taking place around the world, and the multiple ones here in the USA, a major fear has been instilled in the public. However, there are some who are taking a stand and speaking out on the issues, with the most recent being a group of star college athletes.

Jessica Miano-Kruel, Jimmy Flint-Smith and Alex Alsina have come together to spread a message of hope. All three are not just sports stars and advocates, but are also the stars of the new hit TV series, ‘Back Stabber’. The new series on Amazon surrounds these exact social issues, and the lead actors are pushing people to embrace each other for who they are, not what they are.

In the new series on Amazon, harassing others that are different, Jessica Miano-Kruel and Jimmy Flint-Smith play the antagonist ‘bullies’ in the show. In real life, both St.Louis college sport stars are advocates for equal rights and anti-bullying. Volunteering with underprivileged kids and helping to plant a seed of acceptance early on, the two actors said, “We really hope that people watching 'Back Stabber' will see how our character’s actions affect others, because everyone has a little bit of a bully in them, it just depends on how you act on it.”

Furthermore, lead actor and Miami college sports star Alex Alsina, plays one of the many characters who stands up against bullying in the show ‘Back Stabber’. As a Miami native and advocate for change, and recounting his real life story of being bullied as a kid, Alsina recently made The Miami Herald for his role in the show.

The newest series ‘Back Stabber’ was created and written by openly gay actor Ryan Zamo. Zamo told us, “I wrote the show that our messages aren’t thrown in your face. They are more subconscious and subtle, I want viewers to fall in love with the character’s relationships with each other, and hopefully start to take on those ideals in real life.” Being fully produced by Zamo, ‘Back Stabber’ premiered with a budget that was well under $2,000, beating out ‘Paranormal Activity’ with it's previous record for the #1 low budget success of all time.

‘Back Stabber’ premiered June 24th on Amazon, and thanks to the college sports stars and their advocacy for acceptance, the new series has hit major press headlines across the country. The show is free to stream with Amazon Prime, and can be downloaded by anyone without an Amazon account.  To read current reviews on the show visit:

And to stream season 1 of Back Stabber now on Amazon visit:

Source: Back Stabber the Series LLC