'Back Stabber' has become a smash hit, breaking multiple records with its unprecedented success. Now Ryan Zamo, the 27-year-old writer of the series, reveals the real life town he based his show off of. 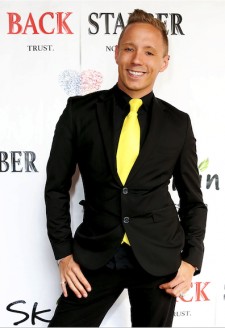 New York, NY, July 17, 2016 (Newswire.com) - ​‘Back Stabber’, the newest series on Amazon, has become a major success after premiering just 2 weeks ago. The show has caught national headlines for its messages behind the show, as well as the show’s success considering its record breaking low budget. Producing season 1 for well under $2,000, writer and producer Ryan Zamo has revealed where the mind blowing story was inspired by, and like most writers it’s based on his real life.

The show also revolves around acceptance, anti-bullying and equality. Coming out at age 16, Ryan Zamo told us he faced many years of bullying for it, and wanted to open people’s minds to acceptance, saying, “Not just LGBT people, but everybody, no matter their age, race, religion etc. And most importantly, I made the characters come from different economic backgrounds, partially because where I grew up they look down upon those that aren’t as wealthy.”

"Ryan Zamo has revealed where the mind blowing story was inspired by, and like most writers it's based on his real life. "

‘Back Stabber’, according to its official description, is set in “a small uppity town located right outside the roaring city of Pittsburgh”, creator Ryan Zamo said, “Well, the show is inspired very loosely on my hometown, Wayne, NJ. It’s a small uppity town located right outside of New York City. The original 1-hour pilot, which was split up when we decided to go half hour and is now episodes 1 and 2, was about 95% based on Wayne.”

With the pilot being a down to earth plot, Zamo said, “The pilot [episodes 1 and 2] center around a bunch of dramatic rich kids. But as the description states, it starts to reveal the truth behind these rich families, because from my experience money can’t buy happiness. Since Wayne, NJ is also the home of ‘The Real Housewives of New Jersey’, most people see this place as a fancy carefree town. Well, it’s not… what people don’t see is the corruption and misery these families revolve around.”

With a lot of [mhm] backstabbing in the new TV series on Amazon, Zamo said he hopes the show will help people understand that being rich isn’t all it’s cracked up to be, saying, “Its true what they say, with money comes power and corruption. I know so many people with the mansions and Bentlee’s that hate their lives; their husband is cheating on them, they’re addicted to prescription pills, and just go along with it to make it look all pretty and perfect. And when the stay-at-home moms have nothing else to do, that’s when the rumors start and people start plotting some pretty sick attacks on each other.”

Though watching ‘The Real Housewives of New Jersey’ does fall in line with some of what Zamo said, it’s still a mystery as to how much the show is actually based off Zamo’s real life, though he added, “There are a few characters based on people I knew from high school. Honestly, like most writers, there is a lot of real life experiences the show is based on. It makes it so much easier, and because the things that happened seemed so unreal, it makes for a great story!”

‘Back Stabber’ has had mixed reviews on the show, often referencing back to its lack of budgeting.  Articles on the show all state that ‘Back Stabber’ often has signs of an extremely low budget, but one thing that stands out is the writing, with many news reporters stating, “The story is mind-bending”.  And now creator and writer Ryan Zamo, is said to be in the running for a few Golden Globes. Sometimes the best stories come from real life, and it seems the new hit show ‘Back Stabber’ has proven just that.

Season 1 is available now on Amazon, free to stream with Amazon Prime, and can be downloaded without an Amazon account.