BitForex Welcomes Jeffrey Wernick to Its Advisory Board 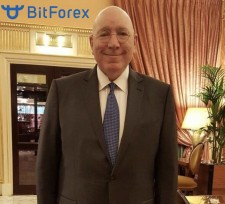 NEW YORK, July 23, 2018 (Newswire.com) - BitForex is happy to announce the joining of veteran investor Mr. Jeffrey Wernick to its advisory board. The newest BitForex adviser started his trading career very early. He began trading options and futures while studying at the University of Chicago. He later worked at ‘Salomon Brothers’, then became the youngest Senior Officer at the National Bank of Detroit. Jeffrey then launched a technology-focused venture capital firm and created a hedge fund to invest in distressed and bankrupt companies, helping to restructure their balance sheets. As an angel investor, his focus expanded to the sharing economy, blockchain technologies, data sovereignty and Bitcoin adoption.

Altogether, Jeffrey has gathered over 40+ years of experience, dedicating his work to bank transactions including leading platforms and the blockchain industry. He is also an angel investor of Uber and Airbnb. He is joining a rich advisory board at BitForex and his advisory role will help guide BitForex’s international growth and development strategies.

BitForex recently announced the launching of digital derivatives in its platform as well as the launching of its own token, the BF Token. The company is committed to growing into the global market based on its unmatched business strategy, advisory board and investors. Jeffrey’s background in trading, quantitative research and venture investment gives him privileged expert insights, which will help BitForex’s continuous and steady growth.

BitForex has gathered a group of world-renowned investors and advisers. With the launching of BF Token, continuous listing of high-quality tokens and addition of digital derivatives to its array of products and services, the top ten trading platform is aggressively escalating its business to the next level, making it fully ready for the global users.