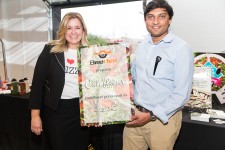 Columbus, Ohio, April 12, 2017 (Newswire.com) - BeeHex, the 3D food printing company with NASA origins, announced a collaboration with Cali’Flour, the leader in cauliflower-based pizza crust and plant-based dessert doughs. For a sold-out crowd of 300 people, the duo 3D printed flower-shaped, cauliflower-based personalized pizzas in under a minute at GroundWork, a Columbus-based firm that provides IT services for non-profit entities.

"Cali’Flour represents the type of forward-thinking collaborations we’re looking for,” says BeeHex CEO Anjan Contractor. “Their organic, plant-based approach to crusts appeals to vegan and health-conscious markets that appear ready to grow tenfold over the next year,” he added.

"Cali'Flour represents the type of forward-thinking collaborations we're looking for. Their organic, plant-based approach to crusts appeals to vegan and health-conscious markets that appear ready to grow tenfold over the next year,"

Cali’Flour founder Amy Lacey said of BeeHex, “The team at BeeHex combines the authenticity and technological capability that it takes to revolutionize how food is made. Anjan, Jordan French, Ben Feltner and Chintan Kanuga are rapidly building out what could be the next major ‘platform play’ in the Internet of Things space in a way that let’s people personalize their foods.”

Jordan French, BeeHex founding CMO said that “no longer do retail-facing businesses need to sacrifice on quality and personalization due to a spike in demand for fresh food. BeeHex’s technology permits a far greater variety of foods be available on demand and to a certain calorie count.” He added, “BeeHex’s systems integrate seamlessly with getting the freshest and newest products to consumers immediately.” Cali’Flour’s Lacey noted that BeeHex’s systems drew an immediate and captive audience and flawlessly printed several of Cali’Flour’s doughs in ways unmatched by other technology and even human hands.

In 2017, BeeHex moved its headquarters to Columbus, Ohio after raising $1 million in a seed round led by Donatos Pizza and Grote Company founder Jim Grote. Several pilots are in the works for its now-famous pizza printers and separately, it’s fine-point dessert printers for frostings, cakes and other desserts.

ABOUT BEEHEX
BeeHex is a robotics company that builds systems for fresh food personalization. Originating from NASA, BeeHex was named the most popular exhibit at a number of expos and fairs in 2016, with clients ranging from General Electric, Group Danone, The Ohio State University, VaynerMedia and Edible magazine (Manhattan). Named a "media darling" by Inc. magazine, BeeHex earned the runner's up spot behind Uber Eats for "Best New Tech" at Vice magazine's Taste Talks awards.

With patent-pending technology often compared to the Star Trek Replicator and the hydrator from Back to the Future: Part II, BeeHex is led by engineers Anjan Contractor, Chintan Kanuga, Fast 50 and Inc. 500 entrepreneur Jordan French and startup attorney Ben Feltner. 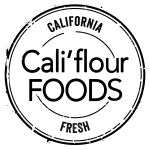 Woman-Owned Business Cali'flour Foods Has Had Incredible and Rapid Growth, Bringing in $4 Million in Sales in 10 Months
Launched March of 2016, Cali'flour Foods is a pioneer in offering cauliflower pizza crusts as a healthy and delicious alternative
Cali'flour Foods - Nov 10, 2017
Newswire