The award honors an individual who has shown exceptional leadership in service to veterans. 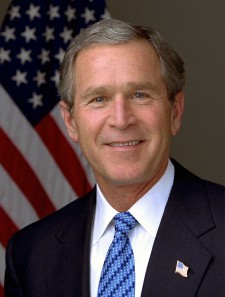 Washington, D.C., August 16, 2017 (Newswire.com) - America’s Warrior Partnership has named former President George W. Bush as the recipient of the third-annual Leo K. Thorsness Leadership Award for his continuing support of veterans and their families. The award recognizes outstanding service to veteran communities and is named after Col. Leo K. Thorsness, a Medal of Honor recipient and one of the most highly decorated American airmen of the Vietnam War.

“Leo was the embodiment of courage, service and leadership, and he brought those qualities to every aspect of the America’s Warrior Partnership mission as a member of our Board of Directors before passing away earlier this year,” said Jim Lorraine, president and CEO of America’s Warrior Partnership. “We honor his legacy by recognizing others who are leading the charge in serving veterans, and we’re proud to present this year’s award to former President Bush for his ongoing support of our nation’s warriors through projects such as Portraits Of Courage.”

Previous recipients of the award include Fox News anchor John Scott and Home Depot co-founder and philanthropist Bernie Marcus. Bush will receive this year’s award during a luncheon at the Fourth Annual Warrior Community Integration Symposium on Thursday, September 7, at the Hyatt Regency Atlanta.

“I thank America’s Warrior Partnership for helping our country leverage a national cadre of determined and experienced leaders who will serve in new ways and with renewed purpose for decades to come. That is the example that Colonel Leo Thorsness set for his fellow Americans,” said President Bush. “It is an honor to be given an award named in memory of this remarkable man.”

More information about the Leo K. Thorsness Leadership Award and the Warrior Community Integration Symposium is available at http://americaswarriorpartnership.org/symposium/2017-symposium/.

America’s Warrior Partnership is committed to empowering communities to empower veterans. We fill the gaps that exist between current veteran service organizations by helping nonprofits connect with the veterans, military members, and families in need: bolstering their efficacy, improving their results and empowering their initiatives. America’s Warrior Partnership is a force multiplier for warrior community integration that enhances communities where great Americans choose to live and contribute. For more information on the organization and how to get involved, visit www.AmericasWarriorPartnership.org. 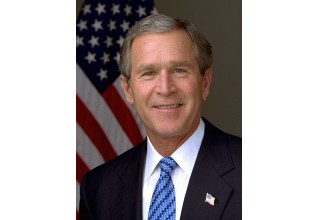 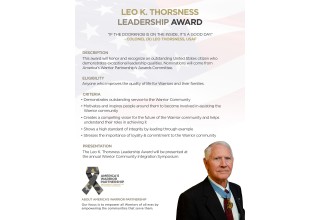 Empowering communities to empower veterans is at the heart of America's Warrior Partnership's mission. AWP is a national nonprofit supporting six regional communities. In just eighteen months of effort, its affiliated communities have developed a rel