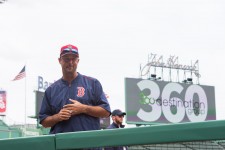 Boston, MA, June 1, 2017 (Newswire.com) -  As part of a long-standing relationship, 360 Destination Group hosted an exclusive client and partner appreciation event with the Red Sox Foundation.  Attendees were treated to a private batting practice with Red Sox legend Tim Wakefield, along with an exclusive lunch on the Strega Deck with Red Sox historian Gordon Edes followed by an inside tour of the park.

"It means a lot that 360 Destination Group came here today from all over the country. I am honored they chose this experience and to help us raise money for the Red Sox Foundation."

"Tim and the Red Sox Foundation worked closely with us to make this an amazing event." said Joe Fijol, Managing Partner for 360 Destination Group Florida.  "Our purpose is to create unique experiences and this was a demonstration of that commitment as well as a thank you to our longstanding client and hotel partners."

"It was so impressive from start to finish, each part was even better than the next." said Brian Conboy, Director of National Accounts Loews Miami Beach Hotel, event co-sponsor and 360 partner "Everyone was in awe of the experience, it is something they won't ever forget."

"At the Red Sox Foundation we share 360's purpose for creating exceptional experiences." said Justin Perryman, Assistant Director, Marketing & Development "Further we appreciate how 360 works with us to do that and, at the same time, helps us to raise money for those in need."

"These appreciation events are an opportunity for us to give our valued clients and partners a chance to experience a WOW from the attendee point of view." said Fijol "Our goal is for them to feel the power of unique moments, giving them inspiration for what they do everyday."

About 360 Destination Group
Part of a nationwide network that includes seasoned industry leaders, 360’s purpose is to push the creative envelope. We work with planners who desire the highest level of creativity, custom experiences and one-on-one service. This fresh perspective, combined with operational precision, has fueled our growth as well as longstanding client partnerships. For more information about 360 visit http://360dg.com

A 501(c)(3) nonprofit, the Red Sox Foundation raises funds through special events, corporate sponsorships, and grants. Founded and initially funded by Red Sox Principal Owner John Henry, Chairman Tom Werner, President/CEO Emeritus Larry Lucchino and their partners, the Red Sox Foundation has won numerous awards for the impact of its innovative programs. In 2010, the Foundation’s Red Sox Scholars program was recognized by Major League Baseball with the first-ever “MLB Commissioner’s Award for Philanthropic Excellence.” In 2009, the Red Sox Foundation was honored by the Robert Wood Johnson Foundation and the Sports Philanthropy Project with the Patterson Award as the nation’s “Best Team Charity in Sports.” For more information about the foundation, visitredsoxfoundation.org

Ethos Event Collective is a Destination & Event Management Company that helps meeting and event planners stay ahead of increasing demands while supporting the people and places that make the experiences we create possible.

ETHOS approaches every client's event with the intention of positively influencing the aftereffect, starting with the big picture, then working through each multifaceted element. They are in pursuit of creative ideas that become grounded in a company's strategy, driving results long after an event has ended. A healthy, working environment coupled with a strategic boots-on-the-ground ally is the reason why ETHOS has seen success in other cities. Now, they are using the same model in Savannah, and are already experiencing a great response from local tourism experts.