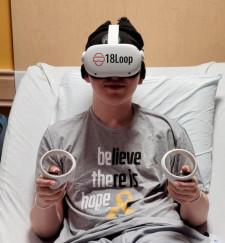 RUTHERFORD, N.J., April 13, 2021 (Newswire.com) - 18Loop has announced that early results are in from the Joint Experimental Intervention Research Study (JEIRS) being run with the American Childhood Cancer Organization (ACCO). JEIRS is designed to measure the effect of Tripp Virtual Reality (VR) Stress Management software on pediatric cancer patients. The initial research participants all reported that their hospital stays had improved with the use of Tripp. Most indicated that their fight against cancer was better overall, and none reported adverse side effects. Furthermore, several children with cancer shared their VR experience with family, multiplying the impact of the technology. Many palliative care departments value family intervention, and this aspect of the work has been an added benefit.

18Loop Executive Director Greg Tarnacki has said that "collaborating with the ACCO, getting access to their wonderful kids with cancer and making a family impact has been the most rewarding part of working on this study. We are expecting to accomplish great things together in the future, with an eye on affecting survival rates in a world where VR is a universal intervention."

Blair Cresawn, Public Relations Coordinator for the ACCO, stated: "Since 2020, The American Childhood Cancer Organization worked with 18Loop to circulate headsets to kids with cancer. This collaboration has been invaluable to kids participating in the program, and we have seen improvements in their mood. Some participants have family members that also benefit from the environment, making this program beneficial to the whole family."

18Loop and the ACCO are planning to complete the first phase of JEIRS by June with a second phase to follow. Technology acquisition for this future phase is funded by Servier Pharmaceuticals, a partner of 18Loop and the ACCO. After joint research is gathered, analyzed and reported on, a VR distribution program will follow.

18Loop and VRforHealth Announce Partnership to Drive Mission Awareness
18Loop and VRforHealth have announced a partnership. The relationship will improve 18Loop's ability to fundraise and execute on research and VR distribution initiatives for kids with cancer and will drive VRforHealth's influence in the healthcare marketplace.
18Loop - Apr 5, 2022