Almost half the world's population is under 25. The challenges they face are great. They are hardest hit by the world's inequalities and injustices. For the 17th consecutive year, Mary Shuttleworth is launching on a tour to bring a human rights initiative to leaders around the world to empower youth whose lives and futures are threatened by human rights abuse. 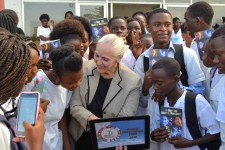 LOS ANGELES, February 24, 2020 (Newswire.com) - The February 28 launch of the 2020 Youth for Human Rights International (YHRI) World Educational Tour marks 17 years of advocating on behalf of the most vulnerable population on Earth—its youth. Since 2004, Dr. Mary Shuttleworth, YHRI founder and president, has circled the globe each year to promote education on the Universal Declaration of Human Rights, adopted by the United Nations General Assembly in December 1948. Her purpose is to empower youth and create broad social change based on the 30 rights enshrined in this document.

This year’s tour launches from YHRI headquarters in Los Angeles with the first stop in Mexico where the governor of the State of Nayarit is hosting and sponsoring the 6th annual YHRI Latin American Human Rights Summit. There, youth delegates from throughout Mexico, Central and South America and the Caribbean will present their work, and network with officials, NGOs, and other young human rights advocates. They will attend seminars and plan and coordinate activities for the coming year.

Since 2004, the World Tour has traveled more than 650,000 miles (some 1 million kilometers)—the equivalent of 26 times around the globe—and have introduced the campaign to more than 1,200 government officials and leaders. The tour provides them human rights educational materials, forges partnerships, and encourages stellar young human rights leaders to apply to represent their countries at the International Human Rights Summit, held for the past five years at the UN in New York.

Youth for Human Rights International is a nonprofit corporation founded in Los Angeles in 2001. The purpose of YHRI is to inspire youth to become advocates for tolerance and peace by educating them on the United Nations Universal Declaration of Human Rights (UDHR).

YHRI has produced simple materials on the UDHR including the YHRI Educators Handbook, the award-winning music video UNITED, public service announcements and a documentary that promotes understanding of the purpose and content of the UDHR. YHRI audiovisual products have reached more than 500 million around the world in 27 languages.