Women's Brains and Bodies on Chick-Lit 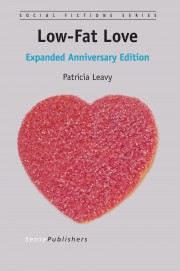 Kennebunk, United States, April 7, 2016 (Newswire.com) - Chick-lit has a bad rap for promoting gender stereotypes, but award-winning sociologist Patricia Leavy, Ph.D. is making waves by writing a new breed of chick-lit that might actually be good for us. Low-Fat Love, her genre-busting novel based on a decade of interview research with women about their relationships, body image and self-esteem issues, offers a big dose of self-esteem. It’s even getting the attention of the health and beauty industry.

Leavy turned to fiction to make her research available to women outside of academia. The philosophy is simple. Fiction can promote engaged learning because readers enjoy it. It's fun. It's also disarming so readers are open to new ideas. The field of “literary neuroscience” has also shown that readers become more immersed in fiction than nonfiction, and the effects last longer.

Why chick-lit? Experts have identified commonly told narratives that reappear in literature and carry great emotional capital for readers. People are predisposed to buy into and be moved by them. Low-Fat Love draws on the emotional capital and familiarity of chick-lit for some women readers and then subverts the stereotypical storyline. Instead of drowning in low self-esteem and succumbing to poor body image, the heroines in this breed of beach-read reflect how readers are feeling and then model realistic, positive growth. For instance, the heroine may not end up with a guy; she may not even want him. Perhaps she ends up in a better relationship with herself. This was Leavy’s approach in writing Low-Fat Love, and why she thinks it has resonated so widely with female readers.

Even those in the beauty industry are curious about this path to self-care. Adeline Koh, Ph.D., the founder of Sabbatical Beauty, an independent beauty start-up, contacted Leavy about her unique novel. As Koh was putting together the company’s spring “Breathe” skincare package, she decided to offer customers a version that includes Leavy’s novel. The “Breathe” package is intended to promote personal well-being and Koh thought Low-Fat Love would be the perfect addition. The “Breathe” package that includes skincare and Leavy’s novel Low-Fat Love offers women beauty on the inside and out. The author and beauty package customers will have a book club meeting via Skype later this spring.

Low-Fat Love is a part of the Social Fictions, the only book series published by an academic press (Sense Publishers) that exclusively publishes literary works based on scholarly research. Leavy is series creator and editor for which she has received numerous awards. Leavy recently released the novel Blue, a follow-up to Low-Fat Love. Blue, celebrates that “we are possibilities” and promises readers a fun way to think about personal choices, friends who “get” us, and empowerment. Sense Publishers is currently offering free shipping and 25% off Low-Fat Love and Blue through their website (use promo code 192837).

Low-Fat Love: Empowering Women to Stop Settling for Diet Relationships
Low-Fat Love, a concept developed by sociologist and relationship expert, Dr. Patricia Leavy, taps into how women often settle in love and life. Low-Fat Love is the subject and title of Leavy's genre-busting chick-lit empowerment novel based on a decade of interview research with women, which today celebrates its 5th anniversary.
Patricia Leavy - Jul 22, 2016
Newswire