Low-Fat Love, a concept developed by sociologist and relationship expert, Dr. Patricia Leavy, taps into how women often settle in love and life. Low-Fat Love is the subject and title of Leavy's genre-busting chick-lit empowerment novel based on a decade of interview research with women, which today celebrates its 5th anniversary. 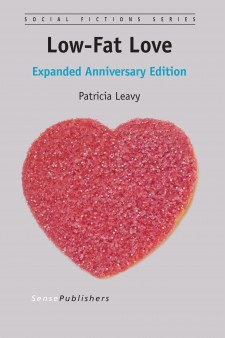 Kennebunk, ME, July 22, 2016 (Newswire.com) - Dr. Patricia Leavy, a trailblazing sociologist and expert on women’s relationships, coined the term “low-fat love” to describe how women often settle in love and life. After a decade of interviewing women about their relationships and identities, Leavy realized many women settle for less than they want because they don’t think they deserve or can have more. They try to pretend what they have is better than it is, in romance, work and friendship. Leavy likens low-fat love to butter substitute. You try to pretend it’s the real-deal, but in the end, it’s a fake, an imposter, a lesser version of what you really want.

With the aim of empowering women to reject “diet relationships” Leavy turned to fiction to bring her insights to the masses. Leavy’s novel Low Fat Love became a phenomenon. She explains, “I received an outpouring of emails from women, and some men, all telling me their stories of low-fat love, including issues with self-esteem, body image, domestic violence, divorce, depression, alcoholism, self-harm, you name it. The novel became a spring board for people to reflect on their own lives. When I did book readings or spoke at conferences and universities, readers would wait in hallways to whisper their stories to me. I’ve published many books but I have never experienced anything like this. The book hit a nerve. It resonated. I hope readers continue to use it as a vehicle for reflection and self-empowerment.”

Low-Fat Love has become a landmark text and a beloved cult classic.

The novel Low-Fat Love has been used in countless college courses across the disciplines to engage students in serious discussions about self-esteem, identity, love, relationships, and the social construction of femininity in popular culture. Low-Fat Love also spawned a radio show and blog, each called Low-Fat Love 101. Recently, start-up beauty company Sabbatical Beauty even partnered with Leavy to use Low-Fat Love as their spring book club read, available in a skincare package aimed at empowering women. Leavy held an online book discussion with the beauty customers.

Today Low-Fat Love, the genre-busing chick-lit novel, celebrates its 5th anniversary. In 2015 Sense Publishers released an anniversary edition of the beloved novel. Leavy revised the novel and added bonus content including a Q&A in which she responds to readers’ most frequent comments and questions. Peter de Liefde, owner of Sense Publishers which has published over 1,200 academic titles, penned a statement for the opening of the book in which he revealed Low-Fat Love became the publisher’s best-selling book the year after it was released and has “ultimately become a landmark text and a beloved cult classic.”

Leavy has received numerous awards for her work, including a 2014 Special Achievement Award from the American Creativity Association. In 2016 Mogul, a social media platform aimed at empowering women, named Leavy an “Influencer” alongside Chelsea Clinton, Melissa Etheridge, Nina Garcia and other notable women.

Low-Fat Love is a part of the Social Fictions series, the only academic book series that exclusively publishes literary works based on scholarly research. Series creator and editor, Dr. Leavy, an independent sociologist and novelist (formerly associate professor of sociology, chairperson of sociology and criminology, and founding director of gender studies at Stonehill College) started the series because she was frustrated that academic research rarely reaches public audiences.  Believing in the unique power of the arts to engage people and fueled by research in literary neuroscience that suggests reading fiction affects readers more deeply than nonfiction, Leavy partnered with the academic press Sense Publishers. The Social Fictions series has become one of their fastest-growing and most successful book series, garnering numerous awards. Leavy’s launch novel, Low-Fat Love remains the most popular title in the series. She recently released the follow-up novel, Blue, which is her personal favorite of her twenty book publications and a Sense Publishers instant bestseller.