Women's relationship expert and creative arts therapist team up to explore why some women settle for diet relationships that leave them longing for more. 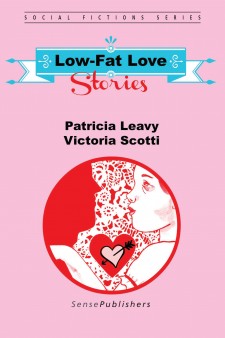 Kennebunk, ME, December 5, 2016 (Newswire.com) - ​Dr. Patricia Leavy, a trailblazing expert on women’s relationships, coined the term “low-fat love” to describe how women often settle in love and life. After extensive interview research, Leavy realized many young women settle for less than they want because they don’t think they deserve or can have more. Many women try to pretend what they have is better than it is, in romance, work and friendship.

As a result, their identities suffer. They may feel dissatisfied, lonely or even fraudulent because they are pretending their life is something other than it is. Low-fat love doesn’t only impact relationships people have with others. The most toxic relationship a woman participates in may be with her self. Daily body image struggles, shame, and self-deprecation are all themes in Leavy’s research. Leavy likens low-fat love to butter substitute. It’s a fake version of what people actually want. She explains, “Sensible food diets may be good for our health, but diet relationships leave us longing for more and feeling badly about ourselves.”

Through both the stories and portraits, Low-Fat Love Stories challenges the representations of women that dominate popular culture, offering alternative narratives and images grounded in women's real experiences.

When it comes to romantic relationships, Leavy suggests some common signs of a diet relationship include one party withholds, failure to support growth, feelings of insecurity, lack of clarity about the relationship, melodrama, and the relationship operates in terms of power and game-play.

Leavy decided to take go further with the concept of low-fat love and diet relationships and embarked on a new set of interviews with fifty-six women ranging from their twenties to seventies and coming from all walks of life. The interviews asked each woman to focus on a dissatisfying relationship with a romantic partner, past or present, or a family member, or they could focus on their body image and identity. She later teamed up with a visual artist and creative arts therapist, Victoria Scotti, and the result is a stunning collection of sixteen short stories with visual art, titled Low-Fat Love Stories.

Written in the first-person with language taken directly from each woman’s interview, the stories are raw, visceral, and inspirational. As a collection, the stories and art set readers on an emotional rollercoaster and illustrate the different forms “low-fat love” may take, and the quest for self-worth in the context of toxic popular culture. The authors developed an original method of “textual-visual snapshots” for this book. They suggest the stories and portraits work in tandem to present the emotional tenor of each woman’s experience. They hope the stories and images also provide a counterpoint to the stereotypical images of women and relationships available in popular culture. While those images are idealistic and unrealistic, the images in Low-Fat Love Stories are haunting.

Patricia Leavy is an independent sociologist and novelist (formerly associate professor of sociology, chairperson of sociology and criminology, and founding director of gender studies at Stonehill College). She has received numerous awards for her work, including a 2014 Special Achievement Award from the American Creativity Association. In 2016 Mogul, a social media platform aimed at empowering women, named Leavy an “Influencer” alongside Chelsea Clinton, Melissa Etheridge, Nina Garcia and other notable women. Victoria Scotti holds a Ph.D. in creative arts therapy from Drexel University. She is an art therapist, artist, researcher and lecturer. A native of Estonia, Scotti shares her time between Spain, Estonia, and the USA.

Low-Fat Love stories is a part of the Social Fictions series, the only academic book series that exclusively publishes literary works based on scholarly research. Series creator and editor, Patricia Leavy, started the series because she was frustrated that academic research rarely reaches public audiences. Believing in the unique power of the arts to engage people and fueled by research in literary neuroscience that suggests reading fiction affects readers more deeply than nonfiction, Leavy partnered with the academic press Sense Publishers. The Social Fictions series has become one of their fastest-growing and most successful book series, garnering numerous awards. Leavy’s launch novel, Low-Fat Love is the most popular title in the series.