With AKA's Customized Functions, Pepper Can Work as an English Teaching Assistant in Classes 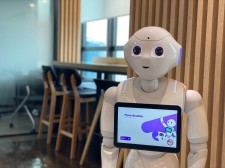 SANTA MONICA, Calif., July 14, 2020 (Newswire.com) - AKA, an artificial intelligence development company, announced a function called “Academy Mode”, developed for Pepper to serve in the classroom despite the current situation of COVID-19. Academy Mode is designed specifically for the Softbank Robotics Humanoid robot, Pepper, to fit classroom settings and will be released in Korea, Japan, and China's market first.

Since entering Japan's market in 2015, AKA has been working together continuously with Softbank Robotics Japan. In May 2019, AKA became an official reseller of Softbank Robotics China for the Pepper robot. Since then, AKA has been actively developing different functions for Pepper to work better in the English education environment. Current functions include Muse AI free chat, Muse Learner’s Chat, and Academy Mode. While the first two are essential for Pepper to converse freely in different topics, the third one enables Pepper to actively engage in classroom interactions and be used as a teaching assistant.

The motivation behind this project is that during AKA's school pilot test for Pepper, they realized that different schools have different objectives, and students have different levels of competency. From this observation, AKA built the Academy Mode to be flexible enough for classroom education. Academy Mode enables teachers to customize class materials by inputting them into the provided website. The inputted materials will be sent to Pepper seamlessly, and this enables students to practice the contents inputted. When students practice with Pepper, conversations are recorded and processed by AKA’s analysis software so teachers can easily track each student’s progress and view study results on the website.

Since the breakout of COVID-19, it is much harder for non-English speaking countries to hire native English speaking teachers. Especially in Asia, where English education is highly stressed on, many countries have shifted their focus more towards speaking in recent years, such as adding speaking as part of college entrance exams. However, with a lack of resources to guide each student, English speaking education still leaves a lot to be desired. In order to improve this situation, AKA developed a function on the world flagship robot Pepper, which can be used perfectly as a teaching assistant. ​

AKA’s CEO, Raymond Jung, commented that “from the traditional English education paradigm centered around native English teachers, non-native English teachers will create a new educational paradigm to deliver effective English education with the humanoid robot Pepper in any Asian country. Ultimately, we will continue to realize the mission of AKA, a future innovator that solves the regional and physical limitations brought by the corona situation and creates the horizon of artificial intelligence and humanoid robots under a new vision.”

Successful Expansion of 'Musio,' an AI Educational Social Robot, Into the Korean Market
AKA LLC - Apr 21, 2020