William McChesney's New Audiobook, 'Retribution: They Must All Die,' Brings His Paperback Book to Life With a Stirring Audio Narrative of an Improbable Friendship

Recent audiobook release "Retribution: They Must All Die" from Audiobook Network author William McChesney provides a captivating telling of two young boys of different races who remain friends despite the racial tensions of the Civil War and the retribution they seek for the bigotry they witness. 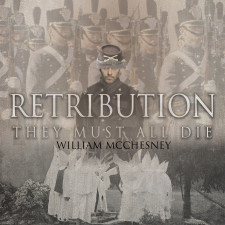 INDIANAPOLIS, January 4, 2021 (Newswire.com) - ​William McChesney, a natural historian and author, tells an incredible story based on the horrors of bigotry during the Civil War. He has completed his new audiobook, “Retribution: They Must All Die,” which is a captivating account that tells the story of a white boy and a black boy who become life-long friends and seek retribution later in life.

McChesney writes, “This adventure spans the better part of the nineteenth century. Everything that happens to these people takes place in real time and what they did will forever be a part of our American History.”

Michael Christian and John Clements are two childhood friends who grew up in Buffalo, New York, in the era of the Civil War. Michael and John were friends since early childhood and grew up together. However, Michael is white, and John is black. For the friends, this never factored into their friendship or childhoods, but that will soon change as the true nature of bigotry and the Civil War reveal the unsettling truth.

Once they complete their grammar school studies, they are prepared to pursue their further endeavors, starting with Michael at West Point and John at the State Normal School in Albany, New York. Their lives open their eyes to the true nature of bigotry in the United States at the time, especially when John and his family move to Georgia at Michael’s urging. The bigotry that John experiences in the South is a surprise to John and Michael, and together, the friends must take action to achieve full retribution.

McChesney’s new audiobook is published by Audiobook Network, and it is a gripping book that takes the reader on a life-defining journey of retribution. McChesney’s story is an engaging one that shows the reader the power of retribution and the strength of true friendship.

Listeners can purchase the audiobook edition of “Retribution: They All Must Die” by William McChesney through Audible, the Apple iTunes store, or Amazon.

Audiobooks are the fastest growing segment in the digital publishing industry. According to The Infinite Dial 2019, 50% of Americans age 12 and older have listened to an audiobook. This huge growth can be partly attributed to increased listening in cars, which surpassed the home as the #1 audiobook listening location in the 2019 survey. Smart speaker proliferation also bodes well for future listening growth and more mainstream listening.

Tags: Audiobook Network, Retribution: They Must All Die, William McChesney

Herbert C. Robinson's New Audiobook 'The Secret Kept' Brings His Book to Life With a Stirring and Engrossing Audio Narrative of One Family's Corruption and Deceit
Recent audiobook release "The Secret Kept" from Audiobook Network author Herbert C. Robinson provides a captivating telling of a family with a closely held dark secret and the extraordinary lengths they are willing to go in order to protect themselves.
Audiobook Network - Nov 20, 2020