Recent release 'Historic Churches in Texas' from Covenant Books authors William and Mary Pamela Schaefer is a fascinating compilation that preserves the historic churches in Texas through documenting them and sharing their stories. 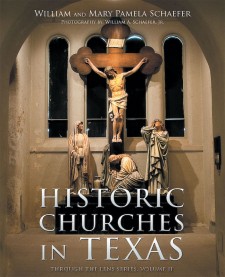 HOUSTON, October 16, 2020 (Newswire.com) - ​William and Mary Pamela Schaefer, a couple who are now retired and traveled extensively across the world; have completed their new book, “Historic Churches in Texas”: a brilliant account filled with photographs and backgrounds of over a hundred churches that carry their own history.

William and Mary write, “Before independence from Mexico in 1836, the Catholic faith was the only religion settlers in Texas, known as Texians, could legally practice. To acquire land in Texas, then a part of Mexico known as Coahuila y Tejas, one had to be a member of the Roman Catholic Church or agree to convert to Catholicism. Although a few Protestant church buildings were erected before Texas’s independence in 1836, most were erected after 1836 because of Mexico’s strict laws prohibiting and often severe punishment for practicing any faith other than Catholicism. The few Protestant church buildings that were erected prior to Texas independence were usually erected along the margins of Texas in the more remote regions of North and East Texas, distancing themselves from Mexico’s center of government in San Antonio.

Published by Covenant Books of Murrells Inlet, South Carolina, William and Mary Pamela Schaefer’s new book is a captivating documentation of 172 churches that will help preserve their history. This book is the second volume of the authors’ Through the Lens Series and they hope that many will take special interest in these Texan historic sites.

Readers can purchase “Historic Churches in Texas” at bookstores everywhere, or online at the Apple iTunes store, Amazon, or Barnes and Noble.

Alysha Morlan's new book 'Shelby Sheep Shakes Things Up' is a captivating tale of a young sheep who wants to do many things that are not in her nature
Recent release 'Shelby Sheep Shakes Things Up' from Covenant Books author Alysha Morlan is a touching story about a little sheep who desires to do different things a sheep doesn't normally do.
Covenant Books - Oct 29, 2020

Spencer Steeves' new book 'Everything Under the Sun' is a brilliant fiction about great kingdoms, centuries-long rivals, and destinies
Recent release 'Everything Under the Sun' from Covenant Books author Spencer Steeves uncovers a gripping fantasy that follows two women who face their fate and tackle their personal battles in a series of unexpected circumstances.
Covenant Books - Oct 28, 2020
Newswire