The world's thinnest wireless keyboard with touchpad/wheel that's thin enough to fit in your tablet case, but strong enough to withstand the weight of a car. Pair up to 3 devices for automatic OS recognition that adjusts keyboard functions to match. 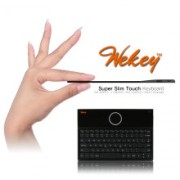 Seoul, South Korea, May 11, 2015 (Newswire.com) - ​Unlike laptops, tablet PC's were developed with the focus of being extremely portable. However, tablets are not as comfortable to type on as laptops. With that said, no one wants to carry around thick or heavy keyboards just to use with their tablets. Wekey was designed to be extremely portable and to fit into a tablet case like a bookmark, allowing use wherever and whenever.

While there are existing wireless keyboards out there that are less than 3mm thick, these generally rely on inconsistent electrostatic touch technology for tactile responses. Wekey's super slim touch keyboard uses a constant pressure type film technology and hi-tech components and materials to overcome the issues with using electrostatic touch.

Because of its thickness (2.5mm) and weight (160g), there may be concerns with breaking or damage. Wekey is so durable that even if driven over by a car or dropped from 5 meters, the keyboard is highly durable and does not easily break. When using your tablet at a cafe, a traditional wireless keyboard is prone to breaking from accidental coffee spills. But not with Wekey. Simply wipe off the coffee and keep on typing.

In addition, from a user's perspective, having to constantly worry about battery life is something no wants to deal with. With its large Li-Po batteries that triple the capacity of other competitors' keyboards, Wekey can be charged fully in an hour and a half and can be used for 3 months (avg. 4 hours a day). This means you only need to charge it 4 times a year!

Multi-pairing support allows up to 3 devices to be paired with Wekey and Wekey will remember which device and OS it's connected to match the OS's keyboard layout. If multi-pairing is just basic, then Wekey brings the next level of convenience by automatically configuring to match the OS of the currently connected device for maximum consumer comfort.

Unlike cell phones, taking selfies with a tablet is uncomfortable. Because of their weight and size, using one hand to open the camera app, getting the right pose, and using the other hand to press the capture button takes some effort. Wekey can launch the camera app (Fn + F4) and even take the photo for you allowing you take more natural photos of whatever situation you may be in.

Wekey’s Indiegogo campaign has been launched and will end in June. Please check out their campaign and show your support.