Vodi Honored to Welcome Admiral Bill Owens to Board of Advisors 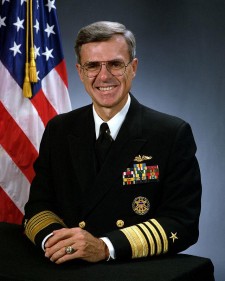 DULUTH, Ga., October 5, 2017 (Newswire.com) - Vodi, the powerful fintech and messaging app, is pleased to announce Admiral Bill Owens as a senior member of its Board of Advisors. Owens, who served as the Vice Chairman of the Joint Chiefs of Staff under President Bill Clinton and later held several leadership positions at major telecommunications companies, will help guide the company to new heights in the world of financial mobility and convenience.

Owens has nearly 20 years of experience in high-level leadership positions at telecom companies, having served as COO and Vice Chairman of Science Applications International Corporation; Vice Chairman, co-CEO and Chairman of Teledisic; CEO of Nortel Networks; Chairman and CEO of AEA Holdings Asia; director of Wipro; and Chairman of CenturyLink. He is also a member of the Board of Directors for such prestigious companies as Polycom Inc., Daimler Chrysler AG, Embarq, Intelius and Force 10.

We're so proud and excited to have Admiral Owens on our Board of Advisors. He has remarkable knowledge of the telecom field and an incredible history of leadership and service.

Owens graduated from the United States Naval Academy with a bachelor’s degree in mathematics; from Oxford University – where he was a Rhodes Scholar – with bachelor’s and master’s degrees in politics, philosophy and economics; and from George Washington University with a master’s degree in management. In addition to his many military awards and decorations, he has been recognized for both his business and philanthropic achievements with the 2004 Intrepid Salute Award, France’s Legion d’Honore, the 1996 David Sarnoff Award and a spot among “The 50 Most Powerful People in Networking” named by Network World.

“We’re so proud and excited to have Admiral Owens on our Board of Advisors,” said Darren Lu, Vodi CEO and founder. “He has remarkable knowledge of the telecom field and an incredible history of leadership and service.”

Vodi has grown by leaps and bounds since officially exiting the beta phase at the beginning of 2017. Having brought on eGift cards for 15 additional countries; added such names as Starbucks, Amazon and Flipkart on the platform; and served as fan vote sponsor for Miss Universe, Miss USA and Miss Panama, the app’s user base has skyrocketed to more than 2 million in a matter of months.

The rapid expansion and improvement looks to continue, with bill payment and money transfer soon to be added on the platform and download totals accelerating as the year progresses, pushing the app head and shoulders above the competition. The addition of such an esteemed advisor as Owens should help propel the app even further to emerge as the international mobile financial services provider of choice for users all over the globe.

Vodi is a global fintech and communication services app and an all-in-one mobile platform. It is a product of MilTec Platform, Inc., headquartered in Atlanta, Georgia (USA). Established in 2014, MilTec offers IT platforms and mobile applications. Visit us at www.vodi.io and www.miltecplatform.com.

Vodi is a powerful new financial services and messaging app with a mission to give back to our users! We do so with our awesome products like eGift cards and prepaid mobile plan recharges as well as exciting in-app rewards!