Missoula, Mont., July 18, 2017 (Newswire.com) - A property that helped turn Montana’s North Fork Flathead River into a conservation stronghold is changing hands but remaining wild, as The Vital Ground Foundation has teamed up with The Nature Conservancy (TNC) and new landowners on a conservation easement protecting 142 acres of forestland and wildlife habitat known as Polebridge Palace.

On the pine-strewn benches above the North Fork Flathead, the area will remain a haven for grizzly bears, Canada lynx, and other sensitive wildlife, as well as a part of the protected Glacier National Park viewshed that annually attracts millions of domestic and international tourists. Meanwhile, TNC can ensure an undeveloped future for a place that once hosted the group’s early momentum-building events in the valley.

"It was originally platted as four separate tracts and now it will be prohibited from subdivision. You could have seen four houses up there instead of one, so that's the biggest win, especially for grizzlies."

“We’re very excited,” said Greg Lambert, transactions manager for TNC’s Montana chapter. “We decided a few years ago that the best option for TNC was not to own it, but as a conservation organization, we wanted the property protected in perpetuity and would never have sold it without an easement in place.”

The agreement includes TNC selling the acreage to new private buyers while donating a conservation easement to Vital Ground, a nonprofit land trust based in Missoula that works to connect and protect key habitat for grizzly bears and other wildlife. The easement stipulates that the new landowners will not develop the forested property beyond its current house and small outbuildings, keeping the bulk of the property preserved as habitat that will help reduce bear-human conflicts in the area.

“Vital Ground and The Nature Conservancy have a solid history of collaborating on projects that benefit bears, people and an array of other species,” said Ryan Lutey, executive director of Vital Ground. “The grizzly’s status as an umbrella species makes our organizations’ missions highly complementary.”

For TNC, the transaction furthers a model the conservancy has used before: buying and stewarding the strategically targeted land, then eventually selling to private buyers with an accompanying conservation easement through a local land trust. In the case of Polebridge Palace, the place became more than just a house and forest, frequently hosting local gatherings and special guests during the late 1990s and early 2000s, when TNC helped spur a strong conservation mindset in the valley. It was also a recognized hotspot for grizzlies, one of the reasons that TNC first purchased and aggregated the four private parcels that now comprise Polebridge Palace. The grizzly factor was also what drew TNC to Vital Ground.

“We were looking for a partner that is active in the area and has a good reputation,” said Lambert. “We knew Vital Ground would be the right fit for the property.”

The North Fork—as many know the valley—is already a sanctuary for wildlife. Biologists have documented grizzly bear activity on and around Polebridge Palace, where shady soils offer bears fall berries and spring root forage—important early- and late-season foods not available on the snowy slopes of the Whitefish Range that rise west of the property. Meanwhile, Canada lynx—which the U.S. Fish and Wildlife Service currently lists as a threatened species—also find a foothold in the valley, with deep snows and diverse forest creating ideal conditions for denning and hunting the cats’ favorite meal, snowshoe hare.

Conserving Polebridge Palace will do more than strengthen an existing habitat for a roster of species that includes wolverine, wolves, moose, and elk. The Whitefish Range stands as an important buffer in genetically linking the Grizzlies of the Glacier area with bears farther west in the struggling Cabinet-Yaak subpopulation. With Polebridge Palace bordered by public land on two sides, and much of the nearby private land also under easements, bears and other wildlife that range west from Glacier will have a bit more security early in their journey.

“It was originally platted as four separate tracts and now it will be prohibited from the subdivision,” explained Lambert. “You could have seen four houses up there instead of one, so that’s the biggest win, especially for grizzlies.” 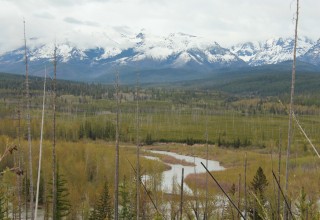 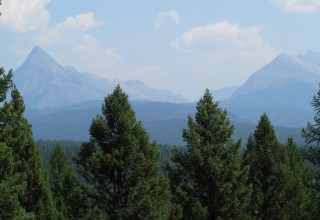 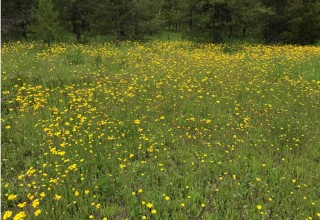 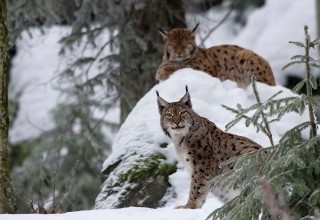