Available on DVD/VOD on Oct. 10 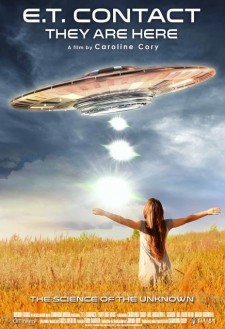 The film, hosted by Quantum Consciousness expert Caroline Cory, documents the jaw-dropping stories of unrelated individuals from around the world who share similar accounts of extraterrestrial and otherworldly encounters. Some of the experts interviewed include world-renowned hypnotherapists Barbara Lamb and Mary Rodwell, Dr. Dean Radin, Chief Scientist of IONS, and Dan Sherman, a USAF Intelligence Specialist.

Cory takes viewers on an extraordinary journey to discover if these seemingly independent yet parallel reports could be scientific evidence of a greater phenomenon at work: The Contact Theory. Harvard astrophysicist Dr. Rudy Schild provides a compelling explanation of the connection between these otherworldly and telepathic contact experiences with black holes, the fabric of space, and the quantum pathways that alien forms use to travel and communicate with us here on Earth.

Through a series of groundbreaking on-camera experiments on human DNA, examinations of crop circles, and interviews with leading scientists including Stanford University's Dr. Garry Nolan and biophysicist Dr. Glenn Rein, viewers will find themselves pondering the nature of their own reality and the true origin of the human species. This documentary ultimately shows that "The Contact Theory" may very well become the key to the Theory of Everything.

Caroline Cory, who herself is no stranger to the otherworldly, was inspired to make this film to ascertain whether science has evolved to the point that academics are willing to re-examine phenomena they once dismissed.  It is a subject close to Cory's heart as she says she discovered in early childhood that she was gifted with the ability to heal, communicate with, and tap into ethereal energies and exchange thoughts with unseen beings. Her strongly self-professed ability to perceive subtle energies since age five allowed her to understand more deeply the structure of consciousness and the mechanics of the Universe. Her desire is to create high-quality films about topics which expand the mind, delve into the world of possibilities and raise humanity's consciousness.

Cory says, "I believe this film is a breakthrough in understanding how humans can, in fact, interact with extraterrestrials and non-physical entities, according to proven scientific laws and compelling new theories. The implications about our origin and place in the universe are tremendous."

"This documentary is something to take note of as this is the first time the scientific approach has been used, and it is quite fascinating," says Vision Films Managing Director/CEO Lise Romanoff.

ABOUT VISION FILMS:
Vision Films is an independent worldwide distributor and VOD aggregator of over 800 Feature Films, Documentaries and Music Programs from some of the most prolific independent film producers in the world. Led by Lise Romanoff, Managing Director/CEO Worldwide Distribution, Vision Films releases 2-4 films a month, across Theatrical, VOD, DVD, and television. www.visionfilms.net