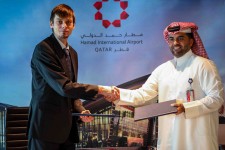 Following Fraport, the airports of Berlin, Düsseldorf, Malpensa and Vienna, Hamad International Airport is the first airport in the Middle East that has opted for this intuitive and highly professional UBIMET solution. Outside Europe, UBIMET has been successfully supporting Aerocare, an Australian ground-handling agent for some time.

“Highly precise weather information at the click of a button guarantees airports increased safety for passengers and staff during extreme weather events and minimises disruptions in ground-handling which incur substantial costs for airports. In Doha, above all, sandstorms, thunderstorms and the ensuing lightning activity play a significant role. With the Weather Cockpit®, we provide ISO-certified communications and a reliable decision base for severe weather events,” says Manfred Spatzierer, CEO UBIMET.

The Weather Cockpit® offers relevant weather data in an easy-to-use online portal, enabling quick and dependable decisions. Airports are informed in time about impending severe weather events and can take precautions as well as adapt roster planning in an efficient and reliable manner. Minimising downtimes at airports is of utmost importance. The challenge consists in stopping ground handling activities as late as possible and resuming them as early as possible without jeopardising passenger and staff safety. Thus, highly precise weather forecasts help save both budget and resources. The Weather Cockpit® recently received the World Summit Award Austria 2017 as a digital solution in the “Business & Commerce” category.

Skytrax Five-Star Airport Hamad International Airport welcomed in less than four years more than 120 million passengers since its opening in May 2014 and ranks sixth among the world's best airports in 2017.

UBIMET is a leading commercial provider of precise meteorology services and severe weather warnings. The global company is headquartered in Vienna, Austria, and has offices in Karlsruhe, Melbourne, Munich, New York and Zurich employing 250 staff from 25 nations. UBIMET provides high-quality meteorological data, forecasts and alerts enabling weather-dependent industries around the globe to increase safety and efficiency.

UBIMET’s expertise and reliable weather solutions have convinced customers from industries such as aviation and rail, construction, energy, insurance, media as well as event organizers. UBIMET has delivered accurate weather data to Formula 1 since 2014 and our services are widely used by the Australian Sailing Team, PGA, FFA and other major sports organizations.

The company was founded as a start-up by Michael Fassnauer and Manfred Spatzierer in Vienna in 2004. The two founders, driven by a passion for meteorology, are still the driving force behind the company today. Red Bull has been a strategic partner since 2012, expanding the company’s global reach.

Positioned at the edge of the Arabian Gulf, Hamad International Airport’s tranquil waterside setting provides a perfect backdrop for its stylish architectural elements, underpinned by advanced airport systems. It features two runways, among the longest in the world, a state-of-the-art air traffic control tower, a stunning passenger terminal with an initial design capacity of 30 million passengers per year, over 40,000 square meters of combined retail, food and beverage facilities and a uniquely shaped public mosque. Hamad International Airport is a world-class facility that sets new benchmarks and redefines the passenger and transit experience.